One of applicants was high-profile victims’ campaigner Raymond McCord 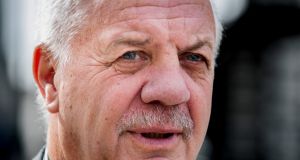 Raymond McCord outside the Royal Courts of Justice in Belfast. Photograph: Liam McBurney/PA

The High Court in Belfast has rejected an application that it would be unlawful for the British government to leave the European Union without a deal.

Lord Justice Bernard McCloskey on Thursday ruled against three challenges to a no-deal Brexit, one of which was taken by high-profile victims’ campaigner Raymond McCord whose son Raymond junior was murdered by the UVF in 1997.

The court permitted a fast-track appeal of his decision which begins on Friday (September 13th) in the Court of Appeal in Belfast.

In his judgment the judge did not address the issue of whether the prorogation of the British parliament by Prime Minister Boris Johnson was unlawful.

The Scottish court found this suspension of parliament was unlawful, while the English High Court rejected this argument. Both decisions are being appealed to the Supreme Court in London.

Mr McCord said he was disappointed with the High Court decision but was determined that the Northern Ireland “voice” also would be heard at the Supreme Court, including on the prorogation element of the case.

“The fight goes on. All being well, we will be sitting in the Supreme Court in London next week,” he said.

In the High Court the applicants had contended a no-deal Brexit would undermine the Belfast Agreement, so damaging the peace process.

However, Lord Justice McCloskey, in a 68-page judgment, rejected the applications. He found the Brexit issue essentially was a political matter and referred to the “boundary” between the legal and the governmental.

“I consider the characterisation of the subject matter of these proceedings as inherently and unmistakably political to be beyond plausible dispute,” he said.

Lord Justice McCloskey also decided the prorogation issue would not be considered in his court as this element of the case was addressed in the English and Scottish courts.

“This court so ruled given that the legality of the prorogation measure evidently forms the centrepiece of the legal challenges in the Scottish and English proceedings,” he said.

Outside the court, however, Mr McCord’s solicitor, Ciaran O’Hare, argued the prorogation issue was vital to and intertwined with the overall case.

Mr O’Hare said with the case appearing to be heading to the Supreme Court it was essential that the Belfast application should also involve the argument that the suspension of parliament was unlawful.

“All of the analysis says that a no-deal Brexit will be most prejudicial to Northern Ireland out of all the regions of the United Kingdom. We say the case for Northern Ireland [in respect of the prorogation argument] is perhaps more important,” said Mr O’Hare.

“All of the analysis points to Northern Ireland becoming an economic wasteland through a no-deal Brexit. That is Mr McCord’s fear. That is why he is taking these proceedings. In the absence of a Northern Executive the only real voice that Northern Ireland has is through the courts,” Mr O’Hare added.

The Court of Appeal unusually met directly after the High Court judgment on Thursday morning and then at lunchtime to consider a number of the arguments. It is convening again on Friday (September 13th) to hear the prorogation arguments.

The North’s Lord Chief Justice Sir Declan Morgan said he understood the appellants’ anxiety that they wanted an opportunity to be part of next week’s Supreme Court London Brexit hearings.

“We will do everything we can to make sure you have a good opportunity to have your voices heard in the Supreme Court,” he said.

Another possible option for Mr McCord, added Sir Declan, was that he seeks to intervene in the Scottish and English cases as an “interested party”, rather than a full party.

The Court of Appeal also is to convene on Monday to consider the arguments that a no-deal Brexit would be contrary to the Belfast Agreement and damaging to the peace process.