Working conditions of members ought to be ‘exemplary’ in society, says President 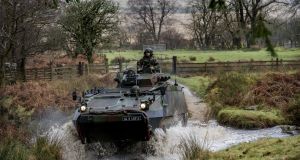 The Irish Defence Forces crossing the Slaney River during a mission readiness exercise in the Glen of Imaal, Co Wicklow. President Michael D Higgins said many are understandably concerned about the ability to attract and retain people of the highest calibre in the Defence Forces. File photograph: Brenda Fitzsimons/The Irish Times

President Michael D Higgins has intervened in a dispute over pay in the Defence Forces, insisting it “should not be too much to expect” that members are paid an income that is sufficient to provide for themselves and their families.

He was speaking at an event at Áras an Uachtaráin to celebrate members of the Defence Forces whose conduct exemplifies the standards demanded of members.

The issue of pay and conditions for the Defence Forces has been ongoing for months and a report by the Public Service Pay Commission during the summer found more than 60 per cent of enlisted personnel and non-commissioned officers intended to leave in the coming two years.

A subsequent increase to the military service allowance was dismissed by the Representative Association of Commissioned Officers, which said it was “not going to cut it” and would fail to stem “the exodus” of personnel from the Defence Forces.

Mr Higgins, who as President is supreme commander of the Defence Forces, said on Wednesday it was “no secret” that changes in conditions for serving men and women “has brought its own challenges”.

“Those providing such a vital service as those in our Defence Forces must be real partners in interpreting and responding to such changes,” he said.

“Should this not happen, there is a real danger of a gap opening-up between our expressed appreciation of their work and the circumstances we deliver for its practice.

“Many are understandably concerned about the ability to attract and retain people of the highest calibre in the Defence Forces.

“It is not too much, I would suggest, to expect that serving men and women should have conditions including an income and prospects that are sufficient to provide for themselves and their families.”

Mr Higgins went further and said the conditions under which members serve “should be exemplary” for other parts of society and economy.

“I have heard and read with anxiety of the distress that is being experienced by some of those who are giving their all to serve the State,” he said.

“There is a duty on us to acknowledge the importance of the contribution of the serving member’s family. While being a member of the Defence Forces is a worthy and dutiful role, it is a perilous one.

“Our soldiers have died on service overseas and in Ireland, reflecting the real dangers they face in serving their country and their fellow citizens.

“Those of us who have become aware of it, are always moved by what is experienced by the partner or family of a loved one working for prolonged periods in dangerous parts of the world, or in perilous situations at home and abroad one cannot truly fathom.

“Recognising the anxiety that this can evoke with their families and friends must be responded to in the quality of our response in terms of living conditions.”

A little over a week ago, the Permanent Defence Force Other Ranks Representative Association (PDFORRA), which represents enlisted personnel in the Defence Forces, formally sought to link up with the Irish Congress of Trade Unions (Ictu).

Comdt Conor King, general secretary of the Representative Association of Commissioned Officers, said Mr Higgins’s remarks were “very timely and welcomed by members and their families”.

“One of the main things we are looking for is an independent pay review body that recognises the unique nature of military service and recognises that we’re not a trade union and don’t have access to trade union mechanisms.

“Basically, we rely on government to ensure that loyalty shown to the State isn’t exploited, which unfortunately up to now it has been. That is patently obvious.”

PDFORRA general secretary Ger Guinan said he “sincerely welcomes” the comments, adding that he hoped “those with the power to make changes are similarly moved to take action”.

A spokesman for Paul Kehoe, the Minister of State at the Department of Defence, declined to comment, although some senior Government and Opposition figures privately expressed the view that the President intruded on policy matters.

Fianna Fáil defence spokesman Jack Chambers, however, said he believed Mr Higgins did not cross a line with his comments.

Mr Chambers, a TD for Dublin West, said he supported Mr Higgins’s statement, which he said “accurately encapsulated the ongoing struggle of members of Defence Forces”.

“The Government continues to ignore the struggle and plight of the worst paid in the public service who are exiting in their droves. They are exploiting the loyalty personnel shown to the Irish State by treating them and their families with total disrespect.

“The President has accurately and succinctly reflected the truth. The Government need to exit their bunker of denial and should heed his words.”