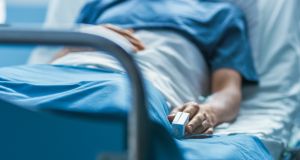 ‘Ireland . . . still has some way to go to match the best countries for pancreatic and ovarian cancer survival.’ File photograph: Getty

Survival rates for many hard-to-treat cancers across the State still lag other affluent countries despite big improvements over the past 20 years, a new study shows.

Ireland outperforms the United Kingdom for six of the seven cancers examined. But there remains a gap in survival rates between Ireland and the best-performing countries, such as Australia and Canada.

The five-year survival rates for oesophageal and stomach cancers in Ireland are rising faster than in any of the seven high-income countries in the study of almost four million patients, published in the Lancet.

The best Irish performance in the study is for oesophageal cancer, where the five-year survival rate of 21.9 per cent ranked second behind Australia in the study and is twice what it was in the 1990s.

With 28.4 per cent of stomach patients alive five years after diagnosis, Ireland ranks third in the study for this cancer, behind Australia and Canada.

However, we fare less well for other cancers with a poor prognosis, ranking last for five-year survival from ovarian cancer at 36 per cent and second last for colon cancer and rectal cancer – with survival rates of 61.8 per cent and 62.4 per cent respectively.

Irish survival rates for oesophageal and lung cancer have doubled over the 20-year period under consideration.

The improvement in Irish survival rates were welcomed by oncologist at St James’s Hospital Prof Maeve Lowery. She said it shows the benefit of multiple interventions, including a reduction in risk factors, earlier diagnosis and centralisation of cancer care to specialist centres.

“It is positive to see five-year survival rates for many cancers equal to or exceeding those of our European and Canadian neighbours. This is likely in large part due to implementation of the 2006 national cancer strategy; in particular, the concentration of specialist cancer surgeries in high volume centres,” she said.

“Ireland is making good progress in terms of survival improvements for all cancers included in this study, but still has some way to go to match the best countries for pancreatic and ovarian cancer survival,” said Dr Paul Walsh of the National Cancer Registry.

Overall, cancer survival in high-income countries is improving, though international disparities persist, the observational study by researchers finds. The biggest improvements are occurring in patients diagnosed before the age of 75, and for people with cancers that have a poor prognosis.

Survival rates for cancer are closely related to the stage of the disease at diagnosis, timely access to effective treatment and the presence of other health conditions. The authors say more research is needed to assess the impact of these factors and to better understand the international disparities.

Earlier diagnosis and improved surgical and other treatment are seen as the main drivers of the improvements in survival rates.

“Earlier diagnosis, improved treatment and other policy reforms have ensured improved pathways for patients to diagnosis and treatment and have all likely contributed to improved outcomes,” say the authors.

1 Transmission of Covid-19 on flight into Ireland linked to 59 infections
2 Covid-19: Range of key indicators on spread of disease starting to ‘level off’
3 Two hundred Irish retailers for all your online Christmas shopping
4 Illegal to sell PPE as an excuse to keep businesses open says Varadkar
5 Garda inquiry into video appearing to show crowded shebeen
Real news has value SUBSCRIBE