Terrorist threat in North is sophisticated and changing – PSNI chief 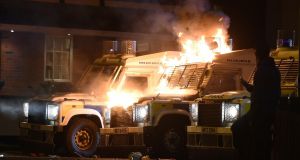 A PSNI landrover at Creggan in Derry after a day-long series of searches by the PSNI. Photograph: Trevor McBride

Chief Constable of the Police Service of Northern Ireland (PSNI) Simon Byrne was speaking on Wednesday after detectives investigating the discovery of a mortar bomb pointed at a police station arrested a 33-year-old man, and a further suspicious device was found in subsequent searches linked to the incident.

An improvised explosive device (IED) was positioned close to a family home in Strabane, Co Tyrone on Saturday.

Mr Byrne hailed the work and courage of his officers, who he said worked without thought for their own safety, but for safety of the residents living near where the bomb was found.

Speaking in Derry, Mr Byrne said he was concerned by the recent upsurge in dissident republican-linked violence, and spent time with officers who were attacked during searches in the Creggan area of the city where another suspicious device was found on Monday.

“I am worried frankly, over the last few months I’ve dealt with more potential threats to kill my officers since I’ve been here than my predecessor dealt with in a whole year,” Mr Byrne said.

“We’ve seen changing types of engineering and capability that show determination and motivation clearly aimed at killing and maiming officers but also indiscriminate: in any one of these situations potentially a member of the public could have been killed.

“The device we recovered here [in Derry] was a potentially dangerous device and I have little doubt had it detonated anyone nearby would have been killed or seriously injured from the way it was put together.

“It was complex and it was sophisticated and the threat is clearly changing.

“Frankly I’m only in front of you today not with an awful tragedy or explaining loss of life simply because of lady luck.”

Mr Byrne refused to be drawn on who was behind the building and planting of the devices, but says that knowledge of explosive-making may be coming from those who had been involved in terrorist activity previously.

“The expertise is coming perhaps from the past, and the internet is buzzing with info on how to make explosive devices, and we’re working with detectives to see how best we can thwart that crime,” he said.

“I’m not going to put labels on particular associations – keep an open mind, people who have built devices in the past will share the knowledge, but equally we know how info goes from other theatres of conflict onto the internet.”

Although Derry and Strabane have been the focus of the searches and recent flashpoints for unrest, Mr Byrne says that people should not discount any area.

“The north west is only part of the focus frankly, it often hits the news because of the reminders of the tragedy here a few months ago, but we have concern about the changing nature of the threat across the country.”

Mr Byrne has reiterated his call for more police officers in order to reach out to communities across Northern Ireland, as he says the current model of relying on officer overtime is an unhealthy way of managing a police force.

“I’ve outlined my plans so it’s come as no surprise, I’ve had discussions with important stakeholders, the Secretary of State is clear on my plea,” he added.

“We need to grow the PSNI to a figure of 7,500 officers to continue the fight against paramilitaries.

“I’m not saying we can’t cope, we deal with a variety of crimes and incidents, day-to-day policing carries on, officers are resistant to all pressures that come their way, but we can’t carry on this way indefinitely.

“if we’re serious about relative peace and normality we need more police officers to work alongside communities. – PA