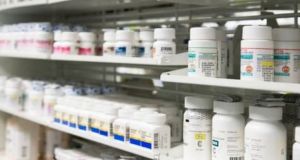 The IPU said it was clear the country could not afford afford cutbacks in health service. Photograph: Getty

Hundreds of millions of euro in savings could be generated as a result of introducing reforms in the health service, pharmacists have said.

The Irish Pharmacy Union (IPU) also said on Monday that there were “sensible cost savings” available which could be reinvested in community-based care if pharmacies were allowed to expand the care they provided.

It said one of the most effective cost savings the Government could implement would be the greater use of biosimilar drugs and that a failure to implement a policy in this area had resulted in more than €300 million in “needless additional spending” over recent years.

IPU general secretary Darragh O’Loughlin said biosimilars were medicines – many manufactured in Ireland -- which clinically had no meaningful difference with the more expensive alternative.

“Three years ago, a national biosimilars policy was promised but has not been implemented. Since 2017 this has led to an estimated €370 million in needless additional spending – up to €125 million that could be reinvested in community healthcare every year.”

“This is a broad concept and experience around the world shows how effective it can be,” Mr O’Loughlin said.

“One example would be introducing pharmacy-based screening for atrial fibrillation – an irregular and often rapid heart rate. A study commissioned by the IPU found this could prevent over 2,300 cardiac events per year with an associated cost saving of €45 million. As well as saving lives it would avoid €1.36 billion in additional health spending over the next 30 years.”

“There is very little low-hanging fruit in terms of savings in the health budget available; what’s there needs to be picked,” Mr O’Loughlin said.

“Why have we not yet implemented the kind of accessible healthcare for common ailments that the Minor Ailments Service in Northern Ireland and its equivalent in Scotland, the Pharmacy First service, both provide?

“GPs are going to be exceptionally busy this winter dealing with Covid-19 on top of their normal heavy workload, and we need to provide other pathways for people who don’t necessarily need a doctor.”

“In order to realise this potential, there is an urgent need to review the current pharmacy contract. Developed in 1996 it predates the internet and the current laws governing pharmacies – it is hopelessly out of date.

“Budget 2021 should provide a new impetus on innovative thinking, which this new contract can deliver to ensure that community pharmacies are adequately resourced so they can provide the continuum of care which is urgently required in our communities and demanded by the public.”