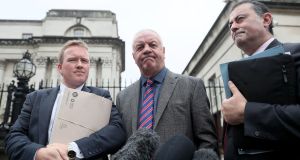 A legal challenge surrounding the British government’s Brexit strategy is due to be considered by Northern Ireland’s most senior judges on Monday.

A three-judge Court of Appeal, led by Lord Chief Justice Sir Declan Morgan, will sit in Belfast next week.

Sir Declan earmarked at least six hours for submissions from lawyers and made himself available to receive preliminary written arguments this weekend.

A trio of challenges heard together at Belfast’s High Court, earlier this week are the subject of Monday’s appeal.

They focused on various aspects of a no-deal Brexit on October 31st.

One that argued the government’s Brexit policy will damage the Northern Ireland peace process was dismissed by the High Court on Thursday and is due to be reviewed at the Appeal Court on Monday.

High Court Lord Justice Bernard McCloskey said the issues raised by three joined cases touched on political matters that the courts should not intervene on.

One of the applicants was high-profile victims’ campaigner Raymond McCord, whose son was murdered by loyalist paramilitaries in 1997.

Unlike Brexit-related challenges against the government heard in England and Scotland, the Northern Ireland cases cannot leapfrog straight to the supreme court following the high court judgment.

Sir Declan has said the UK’s highest court only intended to hear arguments on the prorogation of Parliament next Tuesday.

Lord Justice McCloskey had decided not to consider the prorogation issue when hearing the Northern Ireland cases, because the matter was already being litigated in Scottish and English cases.

A barrister for the government, Dr Tony McGleenan, said he remained sceptical about whether there was a devolution issue.

Skeleton written arguments are still being prepared by legal teams ahead of Monday’s appeal court hearing, lawyers said, but are well advanced.

Mr McCord was not in court for Friday’s brief hearing.

Separately from the proceedings, he said: “I’ve instructed my legal team to apply for intervention in the Supreme Court hearing of prorogation of Parliament as due to the time frame my appeal would not be dealt with in time for the Supreme Court on Tuesday, and Northern Ireland needs to be heard and represented.

“This will hopefully ensure my case is heard and Northern Ireland has a voice and representation alongside the rest of the UK in the Supreme Court.” – PA