‘Guns thunder at midnight’: when the Republic left the Commonwealth

On this day 70 years ago, thousands celebrated as 26 counties ‘cut the last constitutional link with Britain’ 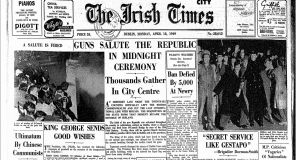 Midnight passed on April 18th, 1949, but the 21 gun salute that was due to take place couldn’t go ahead as eager crowds broke through the barriers on Dublin’s O’Connell Bridge.

The men of the 19th Field Battery would get the salute under way 3½ minutes later, marking the moment the Irish State officially became the Republic of Ireland.

“Expectant crowds thronged the streets of Dublin from early yesterday,” reads the lead story on the front page of The Irish Times on the morning the 26 counties officially left the British Commonwealth and “cut the last constitutional link with Britain.”

The passing of the Republic of Ireland Act in 1948 had laid the foundation for the renaming of the State and the exit from the Commonwealth. The changes took effect on Easter Monday, 1949 - the 33rd anniversary of the Easter Rising.

The progression of the Bill had been swift in the late months of 1948. Around that time, the pages of The Irish Times were filled with stories about the preparation of celebrations (as well as debates over the consequences of leaving the Commonwealth - the issue surrounding the movement of citizens will be one topic with a familiar weight).

On January 23rd, 1949, it was discovered that lampposts and hoardings in central Dublin had been covered with a manifesto during the night, “issued by the Army Council, Óglaigh na hÉireann”.

The message was clear; Ireland had been forcibly partitioned and “Any attempt to give the Twenty-six County area a new status by representing it as ‘the Republic of Ireland’ does not and cannot alter this fundamental fact.”

How exactly the day would be celebrated was discussed in the early months of 1949. At a Dublin corporation meeting on January 3rd, Fianna Fáil TD John McCann said “while the British occupied a portion of our territory, there was no occasion for rejoicing.”

But many did rejoice. Radio Éireann marked the Republic’s official birth at a minute past midnight: “These are the first moments of Easter Monday, April 18th, 1949. Since midnight, for the first time in history, international recognition has been accorded to the Republic of Ireland.

“Our listeners will join us is asking God’s blessing on the Republic, and in praying that it will not be long until the sovereignty of the Republic extends over the whole of our national territory.”

In Dublin, tricolours flew from buildings – private and public – while papal flags adorned houses in the suburbs. The GPO was decked out in a green, white and orange plastic material.

“As the time for the firing approached, a solid mass of people jammed the thoroughfare from O’Connell Bridge to the GPO Every possible vantage point was made use of,” reads the report.

From the city, blazing tar barrels could be seen on the Dublin hills. At 11.45pm, O’Connell Street “became a blaze of light from searchlight batteries ringing the city.” A few minutes after midnight the salute from the guns began, with 10-second intervals between the rounds.

O’Connell bridge was densely packed. Thousands turning out on the night, according to the report, and men, women and children shouted “up the Republic” to a backdrop of dancing and music.

Music rang out as “groups of young people with accordions and other musical instruments joined in singing national airs. Open air céilithe had been arranged at various points, and dancing continued until early this morning.”

In Cork, the report said, “thousands of citizens assembled in Parnell place and the South Mall. Heralded by a fanfare of trumpets, the Proclamation of 1916 was read by Mr. Tom Barry, a commandant-general of the old IRA, from the steps of the City Hall. The Tricolour was then hoisted on the roof of the flood-lit building.”

Parades and events took place all over the country, notably in Limerick, Galway, Dundalk, Athlone, Cavan, Sligo, Waterford, Thurles and Carlow, among many others.

In Dublin later in the morning, following a military parade, the president Sean T O’Kelly addressed the media at the GPO. “We now stand alone, as a nation on our own,” he said, adding: “We are making a big noise in the world, and we will make a bigger noise still. We can be of great assistance if we can only get rid of partition, the one and last worry we have.”

Alongside the lengthy dispatches of celebration published on Easter Monday sat a report of conflict in the North the day before. Crowds in Newry had defied a ban imposed on Easter commemoration services put in place by the government in Northern Ireland.

“Three police cordons were brushed aside as a crowd of 5,000 people swept through the streets of Newry yesterday,” reads a report on the front page. “They then formed in procession and, brushing aside the police, paraded to the Old Chapel Cemetery, where, with the Tricolour displayed, a wreath was laid and the declaration of the Irish Republic was read.”

In Dublin, events ended with the country’s leaders attending a fireworks display in Phoenix Park and an event at Dublin Castle.

In the following days, reaction stories and messages of congratulations from world leaders appeared in the paper. In one of the more sober quotes, George Bernard Shaw, asked by The Irish Times if he had anything to say to the Irish people, told the newspaper: “Who am I that I should send messages to nations? I hope I know my place better.”

The Irish Times published, in full, Mr O’Kelly’s responses to some of the well-wishes – among them was a note to the British king, George VI. The president lauded the “special relations” between Ireland and Great Britain: “I earnestly hope that these relations will continue and that our two countries may advance to better and more cordial friendship,” he wrote.