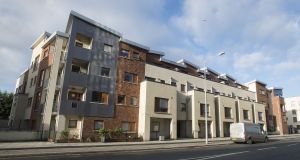 Children as young as five have tried running away from family hubs, while others describe them as “like a children’s jail”, a landmark study published on Thursday finds.

Homeless children’s shame, fear, confusion, loneliness, anger and sadness are recorded in No Place Like Home, a report from the Ombudsman for Children’s Office.

It is the first publicly-funded consultation with homeless children in family hubs – centres to accommodate homeless families, with on-site cooking and laundry facilities, on a temporary basis.

The first hub opened in Dublin in March 2017, as an alternative to hotels. There are now 22 in Dublin and one each in in Cork, Limerick, Kildare and Louth with capacity for 600 families.

For the project, 37 children aged five to 17, and the parents of 43 under-fives, living in hubs in Dublin, Cork and Limerick, were consulted.

Parents identified the safety and stability of hubs, kind staff and cooking and laundry facilities as positives, while children aged five to 12 said the only good thing was other children to play with.

“It is important to note that several young children . . . could not identify anything they liked about living in the hub. In a number of cases, when asked what was good . . . children simply answered with the word ‘nothing’ ,” says the report, which is based on consultations carried out between October and January.

Older children identified kind staff, as well as access to computers as positives.

Parents reported children becoming more attached to their parents, panicking if they could not see them and being “clingy”.

“For some children their unhappiness in the hub was so great that, despite their very young age, they tried to run away,” the report says. “Hannah (8) cried and told us that the hub was ‘like a child’s jail’. She expressed extreme worry and fear for her younger brother, Niall (5) who had tried to run away from the hub on several occasions.”

Older children described lack of space, privacy and not even being able to sit in a room away from their parents, as stressors. A nine-year old girl said she had to “read in the toilet” when her younger sister slept. Almost all wished they had their own room.

Parents and children of all ages struggled with not being allowed visitors – friends to play, or family, while shame and embarrassment were expressed by all children. Many would not tell friends where they lived.

Children’s Ombudsman Dr Niall Muldoon said it was “vital” Government addressed the issues raised by the children and parents.

“There is an urgent need to introduce national standards and an independent inspection mechanism [for hubs],” he said.