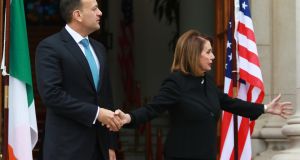 Leo Varadkar and Nancy Pelosi at Government Buildings, Dublin. Ms Pelosi indicated she would look at the possibility of attaching the Irish visa Bill to a routine funding Bill being passed by Congress. Photograph: Nick Bradshaw

US Democrat politician Nancy Pelosi has said she will renew efforts to pass a Bill extending working E3 visas to the Irish and raise the issue with the Republican leader in the Senate.

In her meeting with Taoiseach Leo Varadkar on Tuesday, Ms Pelosi, the speaker of the US House of Representatives, pledged to speak to Republican Senate leader Mitch McConnell as part of a fresh push to secure the passage of legislation in the US congress extending the existing visa scheme to Irish citizens.

The California Democrat, the third highest ranking elected official in US politics, expressed confidence that the Bill would pass through the House.

Sources said she told the Taoiseach she would raise the issue with Mr McConnell in an attempt to push the Bill through the Senate this time.

Immigration was one of the main topics of discussion between the Taoiseach and the Speaker in their meeting during a visit by a US congressional delegation led by Ms Pelosi to Dublin.

Democratic congressman Richie Neal plans to resubmit his Bill, co-sponsored by Wisconsin Republican congressman Jim Sensenbrenner, at the end of this month.

“My Bill is going to be refiled. It has already passed the House of Representatives unanimously. It makes good sense,” Mr Neal, who was part of the delegation, told The Irish Times.

Mr Neal said he was confident that it would pass the Senate this time around.

“My understanding is that not only does the House favour it, Trump favours it and the Senate overwhelmingly favours it; there are but one or two recalcitrants in the Senate who object,” he said.

Ms Pelosi indicated in her meeting with the Government that she was going to look at the possibility of attaching the E3 Irish visa Bill to a routine funding Bill being passed by Congress.

It will be the second attempt to extend the 10,500 visas a year scheme, currently only available to Australians, to Irish applicants after the House approved the Bill but it fell short of votes in the Senate.

Australians take up only about half of the country’s annual allocation of E3 visas – introduced by the US in 2005 and seen as a thank you for Australia’s support of the US in the war in Iraq.

The Government lobbied to be included in the visa scheme, arguing that Irish citizens should be able to apply for any visas not taken by Australian citizens.

Fine Gael TD John Deasy, the Government’s special envoy to the US, said he was confident the Bill would pass given that it now had the backing of President Donald Trump, who expressed his support for when he met Mr Varadkar in the Oval Office during the Taoiseach’s St Patrick’s Day visit to the US.

Mr Trump said the White House had asked for the Bill to be reintroduced.

“The E3 has been brought too far to quit on it. We have agreement from every leadership office in the House and Senate and both sides [Republican and Democrat] that it needs to be pursued again,” he said.