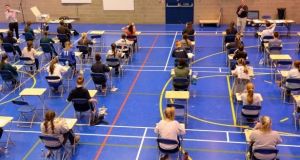 The two main secondary teachers’ unions will meet on Friday evening to discuss the cancellation of the Leaving Certificate written examinations this summer.

Both the ASTI and the TUI emphasised that they had preferred that the written examinations go ahead in late July or August, but only if it was safe to do so, and the health and safety of students came first.

The executive committees of both unions will meet separately on Friday evening to discuss Minister for Education and Skills Joe McHugh announcement “and will not be commenting further at this point”.

The National Association of Principals and Deputy Principals (NAPD) said the alternative to the written exams as proposed by the Government is a “far from ideal solution and not without its challenges”, but it “at least provides clarity for students”.

NAPD director Clive Byrne said the last couple of weeks have been times of “great stress and uncertainty for students and their families”.

He added: “We recognise that there is no perfect solution to the challenges we currently face. Therefore, whilst we appreciate that this alternative arrangement announced today is far from an ideal situation and not without its challenges, we hope it will provide much needed clarity for our students.”

The Irish Universities’ Association (IUA) said the Government’s approach is the “best way to proceed, and that it now provides certainty to students in terms of ensuring state certification for the end of their senior cycle education, and allows them to make plans for third level or other progression opportunities”.

The universities will use the calculated grades for third-level admissions purposes and will work with the Central Applications Office (CAO) to ensure a timely processing of these grades.

It anticipates that 25,000 new students will pass into Irish universities this autumn as originally planned.

The IUA added: “We look forward to early confirmation by the Department of Education and Skills of the date by which the calculated grades will be made available to the CAO, so that new university students can begin their studies as soon as possible in the new academic year.”

“Even though cancelling the Leaving Certificate and allocating of grades without final State exams is unprecedented, this decision means that third level institutions can make offers to students based on these results through the normal CAO process and students will progress accordingly,” he said.

“Because of the previous expectation that the Leaving Certificate results would be well into autumn, we had been preparing for a much-delayed entry for our first years. With the Minister’s announcement today, we anticipate that our academic year for first years will open closer to normal start date.”

The Technological Higher Education Association, on behalf of the Institutes of Technology in Ireland, said the announcement “brings certainty to the process and also allows our institutions to plan toward welcoming new students into the next academic year”.

Technological University Dublin (TU Dublin) president Professor David FitzPatrick has welcomed the announcement saying that it took the decision that the academic year will commence as usual on September 1st with lectures commencing in the third week of September.

“We are delighted now that our incoming CAO applicants will be able to join us earlier in the academic year than expected. This means they will have more time to take part in orientation and to prepare to make the transition into their university lives,” he said.

The Irish Second-Level Students’ Union (ISSU) welcomed the clarity surrounding the examination intentions, citing Friday’s announcement as a “great relief to many students” whose well-being, anxiety and stress levels have been at “an all-time high”.

The Association of Community and Comprehensive Schools, (ACCS) Education and Training Boards Ireland (ETBI) and Joint Managerial Body (JMB) supported the announcement by the minister and said the holding of examinations is now “not feasible”.

In a joint statement, they welcomed the calculated grades model as a “means of allowing students to conclude their studies in schools and to continue on their respective paths as well as the provision that candidates who remain unhappy with the outcome of the calculated grade will have the opportunity to appeal or sit an examination at a later date”.

Aontú Leader Peadar Tóibín raised concerns that students who opt to sit the Leaving Cert exams in November may not gain entry to third level institutions this year as the results will not be available until the New Year.

“This is a significant penalty for those who feel that they have not been treated fairly,” he said.