Covid-19: Some civil servants ‘likely’ working from home until 2021 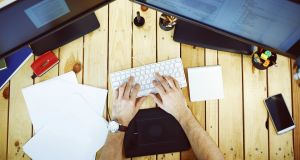 Unions warned that if remote working becomes the norm for an extended period, public-sector employers would be expected to provide adequate supports. File photograph: Getty Images/iStockphoto

Civil servants in the Department of Transport have been told it is likely large numbers of them will be working from home for the rest of the year.

The secretary-general of the department, Graham Doyle, wrote to all staff on Thursday that “it is likely that most of us will be working from home (to a greater or lesser extent) for the remainder of 2020”.

Mr Doyle’s email points out that remote working will remain in place for those who can do so until, at a minimum, August under the Government’s Covid-19 road map. He told that then there would be “a very gradual staggered return to the office environment”.

“It is also clear that the Civil Service and the wider public service will be showing leadership in this regard by continuing to work remotely where possible, so I expect that there may be a requirement for many of us to continue working in this manner for the remainder of 2020.”

In the email Mr Doyle said he expects a staggered return to work “will likely involve a maximum of 25 per cent of staff being present in any of our offices at any one time . . . given the social distancing guidelines that are expected to remain in place for a considerable period of time.”

It is understood that secretaries-general of Government departments have discussed the issue in recent weeks, but no final decision has been made. However, senior sources said that under the current public-health advice, it is likely many civil servants will be asked to remain working remotely beyond August, perhaps to the end of the year.

On Friday, unions warned if remote working becomes the norm for an extended period, public-sector employers would be expected to provide adequate supports.

A spokesman for Fórsa said the union wanted to see “adequate health-and-safety measures in place – in areas like ergonomics, work-life balance, mental health, etc – if remote-working arrangements were to remain in place in the medium to long term”.

“In the emergency, everyone just stepped up and did what was needed. If it were to become ‘the new normal’ for some, those protections would need to be put in place. Workers also need a recognition that, while remote working really works for some, others just don’t enjoy the right home environment,” the spokesman said.

A spokeswoman for the Department of Public Expenditure and Reform, responding to queries on behalf of all departments, said they were “engaged in preliminary planning on how best to manage their work forces in light of the Government’s phased road map for reopening.”

“We will be guided in the first instance by the advice of the NPHET [National Public Health Emergency Team].”