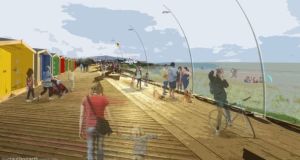 A new town square, revised parking, a coastal boardwalk and removal of overhead cables are some of the proposals in a new “public realm” plan for Greystones in Co Wicklow.

The town – named the “world’s most liveable community” at the LivCom Awards, held in China in 2008 – has retained planning consultants The Paul Hogarth Company to draw up a draft plan, which opened for public consultation at the weekend.

The aim of the plan is to enhance the town’s open spaces and provide ideas on how approaches and gateways to the town could be improved, while assimilating major growth that has taken place over the past decade.

Among the proposals are interactive and educational “green” pedestrian links throughout the town, the development of allotments and development of the coastal amenities.

According to Ryan Walker of The Paul Hogart Company, the plan would also seek to maximise the town’s built and natural heritage, building on environmental attractions such as the cliff walk from Bray to Greystones.

A new public square, to be known as La Touche Square, is envisaged on an existing car park at the Corner of Marine Road and La Touche Road, between the town’s railway station and the sea. Computer-generated images for the area show grass and trees and a performance area overlooking the beach.

“People tell us they do realise what they had here – it is an amazing place which is open to the coast and right beside the Dart station, said Mr Walker.

Also proposed for the sea side of the town is a new boardwalk from the southernmost entrance to the south beach, running northward parallel to the shore to link into the existing promenade. A conceptual image shows bathing boxes that mirror those of the early 1900s and a wide boardwalk with pedestrians, cyclists and public lighting.

Mr Walker said given the level of housing development on the southern side of Greystones, it made sense to extend the promenade.

Parking on Church Road, the town’s main street, is eliminated in another image, with overhead cables also banished. However, Mr Walker said it was likely detailed design would allow for parking of vehicles by the physically impaired.

According to the plan the street is the “beating heart of the business community”, and future improvements would include widening footpaths with high quality paving, “shopfront design guidance”, improved lighting and increased public seating.

The plan submits that Greystones is already highly rated in terms of attractiveness but that there are several “negatives”. These include street clutter, overhead cabling and traffic.

The plan said a “disproportionate amount of space” given over to private vehicles could be used for pedestrians and social interaction.

There are challenges to “walkability” in terms of of new housing estates set on the periphery of the town, with poor quality pedestrian linkages, it said. There was a lack of clear signage and “way-finding measures”, the plan found, and it noted “independently navigating the streets of Greystones can be quite difficult”.

The plan was financed by local group Greystones 2020, with funding from the Leader funding programme, and is supported by Greystones Municipal District, Wicklow County Council and Greystones Tidy Towns committee. It is available to view here.