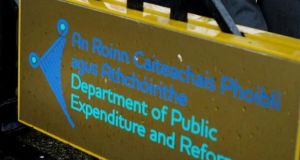 The Government has begun moves to seek new reforms and productivity measures among State employees as part of talks on a new overall public service agreement.

It is understood that the Department of Public Expenditure on Thursday tabled initial draft proposals on reforms and modernisation which will be considered by union representatives, with further talks on the issue to take place in the days ahead.

The Government is understood to be seeking to retain some of the reforms and work practice changes agreed by public service staff as an emergency measure during the Covid-19 crisis.

There were also talks between unions and department officials regarding updated dispute resolution measures to avoid strikes and industrial unrest in the public service. This is another key goal for the Government side in the current talks.

The Government is expected to seek a pay pause for public service staff – potentially for much or all of next year – as part of any new accord.

This has not been accepted by unions which argue that an “acceptable approach” to pay must form part of any new deal. It is understood that unions were informed earlier this week that apart from a general across-the-board pay element of any new agreement, there could also be a separate sum earmarked for sectoral bargaining to deal with outstanding past and current issues and grievances involving particular areas of the public service.

Unions, for their part, have contended that issues such as the additional working hours introduced for staff without extra pay following the Haddington Road public service agreement in 2013 must be addressed as part of the talks on a new agreement.

The current public service accord is scheduled to expire at the end of December.