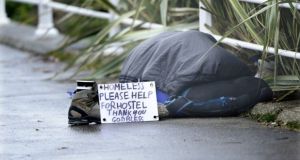 The Government is acquiring more one-bedroom homes because so many homeless people in Ireland are single men, Tánaiste Leo Varadkar has told the Dáil.

Mr Varadkar said there is a shortage of one-bed social housing in Ireland and acquiring such housing was part of the Government’s response to homelessness.

He added that 459 homeless people had been housed under the housing first programme in the first nine months of this year.

The Tánaiste was responding to Sinn Féin housing spokesman Eoin Ó Broin, who called for an immediate, emergency response and additional supports for those experiencing long-term homelessness with the explicit aim of reversing the rise in deaths of those who are homeless.

Mr Ó Broin raised the cases of two homeless men who recently died in Dublin. One man died in a tent in Dublin city centre, while another man died in supported accommodation provided by a charity.

He said 52 deaths of homeless people had been recorded this year in Dublin, a “significant” increase on previous years and increased deaths were also reported in Galway and Cork.

He warned that it would be a “mistake to see these deaths as isolated incidents” and pointed to the death six years ago of homeless man Jonathan Corrie in a doorway across the street from Leinster House.

Mr Ó Broin questioned whether the system was “fit for purpose” and if enough additional supports, including mental health supports, were being provided, because the deaths of those in homelessness were different, with some dying from overdose, suicide, hypothermia, or sometimes murder.

There were 32 additional beds available in emergency accommodation in Dublin on the night this week that a homeless man died in a tent in Dublin, the Dáil was told.

Mr Varadkar said that 31 people came in to emergency beds in Dublin on that night with support workers encouraging people to use those beds.

“No person should die on our streets because of a lack of a bed and there were beds available and support workers encouraging people to come in that night”.

He insisted that the Government takes homeless services very seriously and the HSE and Dublin Regional Homeless Executive on November 10th have commissioned a detailed review of homeless deaths.

“Another thing the Government is doing is acquiring more one-bed homes. There is a real shortage of that social housing in Ireland at the moment.

“And so many people who are homeless in Ireland are single men and need one-bed accommodation, combined with support services.”

Social Democrats TD Cian O’Callaghan expressed concern that there was increased use of private hostels by the Government without support services provided by hotels run by non-governmental organisation.

He said there were reports of “very serious breaches of human rights”, such as rules about not being allowed to chat, and people who were homeless being barred from hostels for very minor infringement of these rules.

Mr Varadkar said the objective is to ensure that people who are homeless receive the “wraparound supports”, regardless of where they are accommodated.

He shared Mr O’Callaghan’s concerns but said it may not be as clear cut as is sometimes being presented and he would contact the Minister for Housing and ask him to deal directly with the Deputy.