Police question three over death of man in Carrickfergus 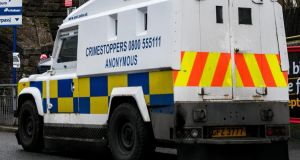 Three people are being questioned over the murder of man in Co Antrim.

Glen Quinn (47), was discovered in Ashleigh Park in the Woodburn area of Carrickfergus on Saturday night.

A postmortem examination to discover how he died was being carried out on Monday.

Detectives later announced they are treating Mr Quinn’s death as murder. The three suspects in custody have been rearrested on suspicion of murder.

Detective Superintendent Jason Murphy said: “I am aware that speculation is circulating that this death is in some way related to the activities of South East Antrim UDA.

“The investigation remains at a very early stage and it is not yet possible to be definitive about the motivation for this man’s murder but the potential for it to be linked to those associated with paramilitary organisations will form part of our investigation.

“Rumour and speculation within the community is likely to be unhelpful as we seek to establish the circumstances surrounding this man’s death and I would appeal to the community to contact us on 101 or via the Crimestoppers charity with any information they may have about the murder or anyone who may have been involved in it.”

“Everyone I spoke to refers to the victim as a lovely and kind-hearted person, someone who was not involved in anything that should lead to this,” said Mr Stewart.

“The family no doubt want answers as quickly as possible and hopefully the police will be able to provide information and I would appeal for anyone with information to come forward.”

The DUP’s Billy Ashe said: “It is a decent area and people are upset.”

Anyone living close to it has been inconvenienced by it over the weekend, by the police cordon, and they are concerned that something like this could happen so close to them.” - PA

Coronavirus: Managing the surge in cases is a day-to-day battle 16:48
Man (30s) assaulted by group at supermarket in North Co Dublin 16:40
Irish flight bringing PPE from China arrives in Dublin 16:37
Coronavirus: ‘Last time I saw her was when she was put into the ambulance’ 16:34
Coronavirus: ‘We are not here to go and hide in the Garda Station’ 16:06