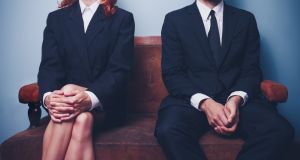 The gap between the number of men and women working in Ireland increased over the last five years. Image: iStock.

The gap between the number of men and women working in Ireland increased over the last five years as more men returned to employment after losing out following the economic crash, a new report finds.

The gender gap grew to almost 11 percentage points (up three points) between 2012 and last year, an Organisation for Economic Co-operation and Development (OECD) study found.

1 Mother of three McGinley children to appear in court
2 First Look: Eden One, Ireland’s priciest gym, opens its doors
3 Fluffy Leo faces backlash after Google video
4 Has fairytale Kerry castle found a buyer at last?
5 Martial arts instructor jailed for one punch killing
6 Michael Harding: I was in my underpants, finishing off the pint...
7 ‘In Ballyhaunis there were Arab people all around me’
8 Judge urged to prevent gardaí interviewing boy (14) over alleged sexual contact with child
9 Explainer: what is the row about SF’s multinational tax plan?
10 Tesla’s next-gen Model X: A frustrating €95k drive – but everyone else will love it
11 ‘Excuse of ignorance’ not open to ex-tax inspector jailed for not filing returns
12 Ross worst Minister for Transport ‘I’ve ever seen,’ says Green leader
13 Woman denied dressing up as her grandmother in ‘ruse’ to cover-up death
14 Billie Eilish: Her stance that her body is not public property is still a radical act
15 Coronavirus: Government urges people to avoid non-essential travel to China
16 Mother of McGinley siblings arrested on suspicion of murder
17 Election 2020: People Before Profit attempt to catch green wave with manifesto
18 Gordon D’Arcy: If Farrell can tap into our self-worth, we’re all on a winner
19 Jonathan Victory: I am tired of people using autism as an insult
20 Britain after Brexit will not be alone, but it will be lonelier
21 Winds of change as Ireland name a refreshed team, picked on form
22 Health benefits of gluten-free diet are misperceived, report finds
23 Gardaí issue public warning after shots fired at patrol car in Co Wexford
24 Coronavirus: Chinese citizens in ‘self-isolation’ after returning to Ireland
25 Road traffic prosecution against Conor McGregor struck out
26 Six forgotten Irish women who achieved the extraordinary
27 Election 2020 fact check: Is the average income really €47,000?
28 Election 2020 fact check: Do banks in Ireland pay no tax?
29 Election 2020: Parties' pledges on housing simply don’t add up
30 Frank Bruni: John Bolton Gets the Last Laugh
31 There’s no need to be scared when things end
32 Girl (9) seeking ‘utterly irreplaceable’ pig teddy lost at Dublin Airport
33 ‘Embarrassing’ Trump told Ireland is not part of UK
34 Voters must look to painful lessons learned
35 Miriam Lord: Sinn Féin goes arthouse for Everybody Can Have Everything manifesto
36 Banks withdrawing from ATMs – another failure of regulation
37 Ireland’s 10 Test matches this year will decide World Cup ranking
38 No obvious signs of injury on remains of McGinley children
39 New device to detect cars being driven without insurance issued
40 ‘I had an abortion. Now my fiance says I am heartless and has broken it off’
Real news has value SUBSCRIBE