Irish woman in Las Vegas: ‘People were running - it was like a stampede’

‘Sheer collective panic, we knew something wasn’t right, but the not knowing was frightening’ 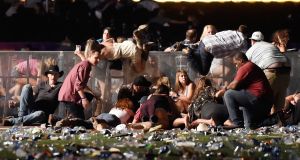 Dublin woman Christine O’Hanlon was at the nearby Aria hotel when the mass shooting at a Las Vegas music concert took place.

More than 20 people and at least 100 were injured during the attack at the at Route 91 Harvest country music festival on Sunday night.

Ms O’Hanlon said during the shooting she was not sure what was happening.

“All of a sudden there was a bit of a commotion and people started to run. At first, we weren’t really sure what was happening but I could hear popping sounds and obviously that was gunfire, but we didn’t realise it at the time,” she said.

“Then people were running, it was like a stampede. We weren’t sure what was going on.”

Ms O’Hanlon told Newstalk all the people working in the casino bent down behind the tables.

“Because there was such confusion, no one knew what was happening. The reception area cleared out - people lay down on the floor. There was no alarm,” she said.

“One of the staff said it was unusual, normally an alarm would sound, that’s why they were confused as well. Because it happened so quickly.

“We ran out to the front of the hotel, people were talking, said there was shooting at the Mandalay Bay hotel, which wasn’t too far from us because we could hear the gunfire.

“We thought then we have to get back inside. We managed to speak to one of the pit bosses, asked what’s going on, because the casino had cleared out quite a bit, but there were still people on the slot machines.

“We then went to security who recommended we go to our rooms.” 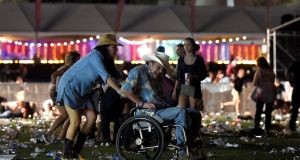 Ms O’Hanlon said she and other guests were currently on “lock down” in their hotel rooms.

“People were unsure, we helped one little old lady to her room to her family, she was very shaken, her family were oblivious,” she said.

“On our way to our room met other people who were going downstairs, we told them what was happening, there was a lot of confusion.

“Sheer collective panic, we knew something wasn’t right, but the not knowing was frightening.

“When we walked back through the casino to get to lifts to the room, there were no staff to say what was happening other than pit boss - it was eerie.”

A honeymooning couple from Killyleagh, Co Down were at the Las Vegas concert.

Stuart McCormick and his wife Zara, who were married in Les Vegas last Friday, hid behind a stall when the shooting began.

“We were close to the middle when we heard four noises and panicked,” Mr McCormick told BBC News Northern Ireland. “Zara ran and brought me with her to the exit, but we were held inside.

“Then we hid behind a stall, but were still visible. We thought the shooters were at our level during this.

“I realised it was coming from the Mandalay Bay side, so we ran towards Hooters. We ended up hiding in the MGM parking lot behind two cars.”

Frances McCullough from Belfast is also on holiday in the city and is staying in a hotel next door to the Mandalay Bay.

She told BBC News Northern Ireland she witnessed a scene of absolute chaos.

“I don’t think I’ve ever experienced fear like it in my life”.

Ms McCullough explained how she had left her hotel with her friends for a shopping trip, and shortly after leaving the building they heard gunfire.

“We thought at the start it was fireworks, until we heard people on the strip shouting that it was a shooting.”

Her group continued walking along the strip, not realising the extent of the danger.

“We got as far as Planet Hollywood, then we heard screaming and shouting - the police were running to us to tell us: ‘Get out, run for cover, there was a shooter on the strip’.

“And from there it just led to chaos, absolute chaos.”

Ms McCullough took shelter in another hotel and has been there for a number of hours.