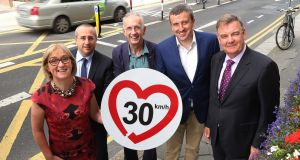 “Dublin City Council has pioneered the roll-out of 30km limits in this country and I sincerely hope that their example will be copied by other local authorities around the country,” she said. The limits meant healthier, greener, more prosperous, quieter and better quality of life for people, she said.

Speakers at the event, which marks the beginning of Road Safety Week, included Rod King, founder of the “20’s Plenty for Us” initiative in the UK, which campaigns for the roll-out of 20mph zones. Dermot Stevenson, executive engineer with Dublin City Council and Antonio Avenoso, director of the European Transport Safety Council also addressed the meeting.

Mr Avenoso said 26,000 people were killed last year on EU roads. He highlighted the role of speed in the deaths and said many cities in Europe were moving toward 30km zones, including Paris, where the speed limit will be enforced in all urban areas by 2020. In Switzerland up to 40 per cent of the population already lives in a 30km zone, he said.

“We strongly encourage local authorities to implement 30km zones in urban areas, and residential areas, areas where there are schools and interactions between vulnerable road users and drivers,” he said.

“We don’t want to limit the maximum speed of cars . . . what we want is a car that detects the speed limit and helps drivers respect the limit,” he said.

“The technology is there; we are fighting for it.”

He said the residential area of Marino, in north Dublin, had been the pilot for the project in 2005. The speed limit was reduced and there were also physical alterations to the streets.

Mr King said 25 per cent of the population were living in towns in Britain with a “Total 20 policy”, a 20mph speed limit, including in London where 80 per cent of inner city boroughs had the limit. He said data showed there was a 4 per cent reduction in casualties for every 1km/h reduction in speed.

“A city that permits 50 kilometres per hour on residential roads will never be child-friendly and will always deter physical activity,” he said.

“If you love your place and its people then it’s time to love 30.”