Man appears in court on charge of murdering Limerick boy (11) 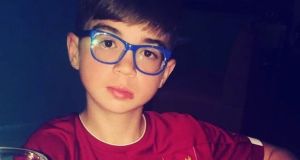 A man has appeared in court charged with the murder of Limerick schoolboy Brooklyn Colbert.

Patrick Dillon (26), of Dalgaish Park, Moyross, Limerick, appeared before Limerick District Court shortly after 10am on Friday and was charged with the 11- year-old’s murder.

The accused is alleged to have murdered the boy at a house on Shanabooley Road, Ballynanty, Limerick, on November 3rd. Details about the boy’s injuries were not disclosed.

More than 30 gardaí flanked the accused in court. A number of people in the court made gestures to the defendant throughout the brief court hearing, and banged benches.

The victim’s father Wayne Colbert, a well-known Limerick soccer player, was in court.

Detective Garda Eoin McDonagh, of Mayorstone Garda station, gave evidence of arresting the defendant, and with charging him at 6.12pm on Thursday night. The garda witness saidthe defendant “made no reply” to the charge.

Julianne Kiely, of Kiely McCarthy Solicitors, represented the accused in court.She sought to have the matter adjourned and requested that her client receive “psychiatric treatment as soon as possible”.

He was remanded in custody to Limerick Prison on November 12th.