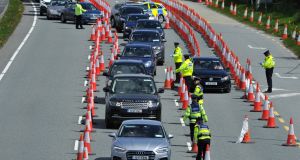 The car initially stopped, but then accelerated and fled the scene, hitting a garda in the process. File photograph: Dara Mac Dónaill

A garda is in hospital with serious injuries after being knocked down by a car on the M1 motorway in Co Louth.

At 1.45pm gardaí from the Dundalk road policing unit pulled a car over along the northbound carriageway of the M1, near Junction 20, while conducting speed checks.

The car initially stopped, but then accelerated and fled the scene, hitting a garda in the process. The garda had been walking over to the vehicle from their patrol car to speak to the driver.

The injured officer was taken by ambulance to Our Lady of Lourdes Hospital in Drogheda.

A Garda spokesman described the officer’s injuries as serious, but they were not thought to be life threatening. The driver of the vehicle involved in the hit-and-run has not yet been located.

Gardaí in Dundalk are appealing for any witnesses to the incident to come forward, or road users with dashcam footage along the M1 route at the time of the hit and run on Saturday afternoon.