The history wars: A new battleground in Irish politics

Is Brian Stanley’s tweet part of a concerted Sinn Féin effort to rewrite the Troubles? 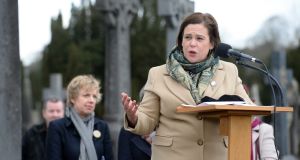 Mary Lou McDonald speaks at a graveside commemoration in Glasnevin to mark 150 years since the birth of Constance Markievicz. Photograph: Dara Mac Dónaill

Sinn Féin TD Brian Stanley’s tweet comparing the Kilmichael ambush and the Narrow Water attacks that left 18 British soldiers dead was not just another row about yet another injudicious comment by a politician on social media. Instead, it illustrates where the new division in Irish politics is; and how the battle over history will define it – with Fianna Fáil and Fine Gael on one side and Sinn Féin on the other.

The battleground may be policy and politics – but it is also history.

Stanley’s tweet was a classic political gaffe, in which he said something he believed but that it was not advisable to say, likening Kilmichael to the Provisional IRA’s attack in Warrenpoint, or Narrow Water as it is called by many.

Though Stanley did not mention it, the same day, in Mullaghmore, Co Sligo, an IRA bomb killed Lord Mountbatten, a senior member of the British royal family, as well as an 83-year-old woman and two teenage boys.

Stanley was widely criticised by opponents for seemingly glorifying the deaths of the British soldiers. His own party was privately furious and publicly censorious: “A singular, one-off mistake,” said Mary Lou McDonald. Taoiseach Micheál Martin issued a thundering rebuke.

Northern First Minister and DUP leader Arlene Foster complained to the Ceann Comhairle, who replied that a “credible political response” was needed from the TD. Columnists wagged their fingers. Sinn Féin’s social media army leaped to Stanley’s defence by attacking anyone who criticised him.

Stanley apologised, and stayed in his job as chairman of the Dáil’s most important committee, the Public Accounts Committee, though he has landed himself in newer, unconnected strife since about his social media commentaries.

While Stanley may have apologised for his comments, he will never repudiate the sentiment behind them. He was apologising for expressing his views in the way he did; he did not – nor would he, nor would he be permitted to – repudiate those views.

Those views are an essential part of the party’s identity, its sense of itself and its mission. Asked if there was anyone in the entire party who would disagree with Stanley’s views, one Sinn Féin TD replied: “I wouldn’t think so.”

This is the conventional Sinn Féin theology – that the Provisional IRA’s campaign was the direct political and moral descendant of the War of Independence, 1919-1921, which secured independence for Ireland but only in its partitioned form.

It links Sinn Féin today to the party of Griffith, DeValera, Cosgrave and Collins. Only last weekend McDonald was tweeting “happy birthday to us” on the anniversary of Sinn Féin’s founding in 1905 by Arthur Griffith.

This is, to put it mildly, a selective reading of history: the list of parties that can fairly claim to be descended from Griffith’s Sinn Féin includes Fine Gael and Fianna Fáil, the Workers’ Party and Democratic Left.

The claim that the Provisional IRA was the heir to the guerrilla army that fought the War of Independence is even more fiercely contested. Micheál Martin, who has more than any other politician engaged in the history wars with Sinn Féin, has said the idea of an “unbroken chain” from Patrick Pearse to Gerry Adams is a “dangerous and corrosive myth”.

But these contested linkages to the period of the Irish revolution are important to Sinn Féin. History is important, because disputes over history are almost always about the present.

Legitimacy for the IRA

Seeking to link Sinn Féin and the IRA to the revolutionary period is not about the War of Independence; it is about the Provisional IRA’s campaign, and an effort to retrospectively seek legitimacy for it.

Stanley’s tweet wasn’t about Kilmichael; it was about the Troubles. The legitimacy of Kilmichael is not a point of contemporary political dispute; the legitimacy of Warrenpoint and the deaths that happened there (and, far more so, Mullaghmore, which he carefully did not mention) very much is.

Sinn Féin has always been alert to the opportunities and dangers of the historic comparisons. In 1985 Sinn Féin’s director of publicity and IRA volunteer Danny Morrison published a pamphlet, The Good Old IRA, attacking the “hypocrisy”, “ignorance” and cynicism” of those who drew a false distinction between the IRA who fought the War of Independence and the Provisionals.

Speaking to The Irish Times this week, Morrison was just as sharp, condemning the “hypocrisy and double standards” of Fine Gael and Fianna Fáil. The War of Independence and the Provisionals’ campaign, he says, had “exactly the same objective – to get British rule out of Ireland”.

However, Fine Gael’s former minister of justice and foreign affairs, Charlie Flanagan, a long-time IRA and Sinn Féin critic, believes the linkage is a bid to “to launder the IRA campaign”.

“They are using the decade of commemorations in a way that is divisive and dishonest,” Flanagan says. “I’m really concerned about it. The Stanley tweet actually goes to the heart of it. He’s seeking to legitimise the IRA of 1979 by linking it to the IRA of the War of Independence.”

This is the heart of the matter. Whatever about historical accuracy, the larger question is a moral and political one: was the Provisional IRA’s campaign justified? That is really what the argument is about. Yes, says Sinn Féin. No, say the old “establishment” parties in Dublin.

“The War of Independence had broad public support, and the democratic legitimacy of the 1918 general election,” says Flanagan.

“What democratic legitimacy did Pearse and Connolly have in 1916?” asks Morrison in reply.

For a long time, the overwhelming majority of people in the Republic – as well as the North – also said no. But that picture is not as clear now. For younger people, too young for the Troubles, the lack of any democratic mandate for the IRA’s campaign anywhere is less troublesome.

As the former Green Party election candidate Saoirse McHugh recently tweeted, reflecting on the account of the Mountbatten assassination in the Netflix series The Crown, “To people in their 20s, the 1970s may as well be the 1920s”.

What is not contestable is that for the entire period of the IRA campaign, public support in the South for the violence was minimal, and as a consequence Sinn Féin’s electoral performance was negligible.

When the strategy changed from a military one to a political one, Sinn Féin still supported acts abhorred by most others. Time helped; but so did a conscious effort to identify the Provisionals’ campaign with the War of Independence.

That continues today. Sinn Féin makes no distinction between commemorations of the old IRA and the Provisionals. It is conscious that violence was rejected by southern voters and, while it is prepared to justify and defend the Provisionals, it prefers to do so by linking to Kilmichael rather than Mullaghmore.

What is not contestable is that Sinn Féin has built a left-wing anti-establishment brand that is compelling to many voters. For many of those voters, an unpopular armed campaign is no longer an albatross around the party’s neck. For them it’s just history.

McHugh is right about one thing: demographics tell much of the story. Politicians in every party say there is a sharp divide between people who grew up after the ceasefires and those who became politically aware in the days when killings in Northern Ireland were a staple of the evening news.

In February’s general election this year, the party won 32 per cent among the under-35s. “It’s remarkable,” says Morrison, “that younger people are so open to Sinn Féin given the demonisation of Sinn Féin by Fianna Fáil and Fine Gael.”

The language wars in the Republic are beginning to be noticed in Northern Ireland: “I think you see a new faultline starting to appear in southern politics,” says Prof Peter Shirlow, director of the Institute of Irish Studies at University of Liverpool, “Unionists are starting to notice it.”

The idea that gives Fine Gael and Fianna Fáil – and many other people in the South – indigestion is the idea of a Sinn Féin taoiseach attending Provisional IRA commemorations. “I’m depressed about it all,” says one former minister.

Then, as now, Sinn Féin will draw on the history of the struggle for independence a century ago. The death on hunger strike of the lord mayor of Cork Terence MacSwiney in 1920 was one of the totemic moments of the War of Independence, bringing Ireland’s struggle to world attention.

Then, as now, the claim of the unbroken chain from MacSwiney to Bobby Sands will be disputed by Sinn Féin’s opponents. The decade of commemorations approaches more contested territory.The wars over history – and the battle for the future – will only grow hotter.