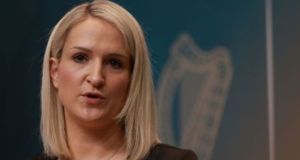 Minister for Justice Helen McEntee has announced she is expecting her first child next May, making her the first member of Cabinet to be pregnant while in office in the history of the State.

In a post on Instagram on Saturday, Ms McEntee announced it would be her and her husband’s “last Christmas as a duo.”

“Minister McEntee and her husband Paul are delighted to be expecting their first child, due in May 2021,” her spokesman confirmed.

Ms McEntee was appointed Minister for Justice in June 2020, previously she had served as minister of state for European affairs in the last Fine Gael-led Government.

She was first elected to the Dáil in the Meath East constituency in 2013 in a by-election, filling the seat which had been held by her father Shane McEntee.

In 2017 she married Paul Hickey, who previously worked as a parliamentary assistant to former minister for education Joe McHugh.

It is not yet clear how Ms McEntee’s maternity leave will work. Currently TDs, Senators and county councillors are not entitled to receive materntiy and paternity leave as they are in other jurisdictions.

When Fianna Fáil attempted to introduce a bill to allow for leave in 2018 it emerged that female TDs have to provide a sick note to take time off after they have their babies. Legal issues arose in a number of areas including whether the Dáil could legislate for TDs to be absent from duty.

In 1979 Fianna Fáil TD Máire Geoghegan Quinn become the first minister to give birth while in office when her second child was born. However she was not a cabinet minister at the time but a junior minister at the Department of Industry, Commerce and Energy under Charles Haughey’s government.