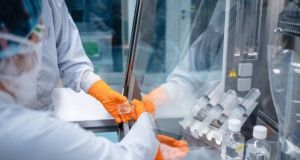 The regulator for medical products has urged people to be vigilant for fake Covid-19 vaccines as the Government finalises its distribution plans. Photograph: BioNTech SE 2020/PA Wire

The regulator for medical products has urged people to be vigilant for fake Covid-19 vaccines as the Government finalises its distribution plans.

It comes as Europol warns member states that organised criminals are highly likely to manufacture and see fraudulent vaccines to take advantage of the expected massive demand.

The agency also warned of the risk of criminals hijacking vaccine shipments for onward sale.

The Health Products Registration Authority (HPRA) told the Irish Times it will be monitoring the supply chain for fake Covid-19 vaccines, alongside the Garda, Revenue and Interpol.

It urged anyone with information on the “supply, advertising or manufacture of unauthorised Covid-19 related vaccines, medicines or medical devices” to get in touch, adding that any information will be treated in the strictest confidence.

Advertisements are already appearing online for fake vaccines, often under the names of the pharmaceutical companies, such as Pfizer and Moderna, which are in the final stages of producing the genuine product.

“Once a legitimate vaccine enters the market, counterfeited versions of the specific vaccine brand are expected to circulate rapidly,” the Europol said.

The UK has already started distributing vaccines with Ireland expected to begin the process in early January.

In its warning, Europol said organised criminals are already exploiting the Covid-19 for profit, including selling fake flu vaccines which are in particularly high demand this year due to the pandemic.

In October, the World Health Organisation uncovered the distribution of a fake flu vaccine in Mexico. It purported to be from a genuine pharmaceutical company but featured the incorrect batch numbers and expiry dates.

“The same scenario is also likely to happen when Covid-19 vaccines do become available.”

Fraudulent products claiming to treat or prevent Covid-19 are already on sale online and offline, it said.

“Some dark web markets feature advertisements for fake Covid-19 vaccines. The number of offers is limited at this stage but will likely increase once a legitimate vaccine becomes available.”

Fake vaccines represent a significant threat to public health, the agency said. At best they could be ineffective, giving people and communities a false sense of security. At worse they could be toxic due to the unsanitary conditions of the underground labs producing them.

Europol also warned fake vaccines could find their way into legal distribution channels, as frequently occurs with other counterfeit pharmaceuticals.

Vials used to store the vaccine should be completely destroyed after use to prevent criminals later filling them with fake products, it said.

The “exceedingly high demand” for vaccines may also lead to criminals hijacking shipments and stealing products. Transport associations are already upgrading their distribution security, it said.

Europol pointed out that stolen vaccines may pose additional health risks as the products will have left the cold chain.