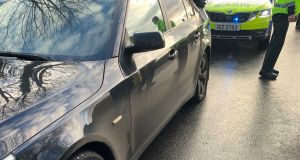 The car which was stopped by officers following a pursuit which began at the Fermanagh/Cavan border onn Saturday. Photograph: PSNI

Police in Northern Ireland and the Republic are carrying out a cross-Border operation targeting criminals and drink-drivers over the Christmas period.

A man was arrested on drugs and motoring charges on Saturday as part of the operation which will take place day and night over the coming weeks.

The 29-year-old was arrested after he failed to stop for police at the Fermanagh/Cavan border on Saturday morning. Following the arrest, police searched a house in the Fermanagh area and seized drugs with an estimated street value of £23,000 (€25,500).

“We very much appreciate that things are very different for all of us this year with the current pandemic, however our commitment to building safe communities remains,” Mr Freeburn added.

“Police officers from departments across the service will be providing visible and accessible policing to local communities and businesses right across the area.

“We will also be working in partnership with An Garda Síochána, running joint operations to help deliver safer streets for shopping and socialising, as the Health Protection Regulations permit, safer roads and public transport, safer homes for those at risk of domestic abuse and safer businesses.

“There will be an increased police presence, with authorised checkpoints as part of our anti-drink and drug-drive part of the operation, but we will aim to keep any disruption to a minimum by regularly moving across the area.”

Mr Freeburn said officers would be carrying out beat patrols as well as providing crime prevention advice to local businesses.

“Our ultimate aim is to keep everyone safe but also deny criminals the use of our road network,” he added.

“We will also continue our four Es approach to the Health Protection Regulations of engage, explain, encourage and, as a last resort, enforce, to those who recklessly ignore the rules.” – PA