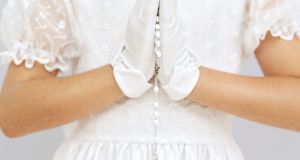 Irish children who made their First Communion in the time of Coronavirus have seen their earnings fall as the pandemic hit their holy payday hard according to the annual Ulster Bank Communion Survey published today (SATURDAY).

While the average amount of money received by children making their Communion fell from €617 last year to €588 in 2020, more than one in four received less than €200 compared with just 9 per cent who fell into that bracket in 2019.

Meanwhile 6 per cent of parents who took part in the research said their child had received more than €1,000, down from 13 per cent last year.

The source of the money children received this year has also changed. According to the survey, 52 per cent of parents said other family members were most likely to have given money to their child for their Communion, down from 68 per cent in 2019.

A third of parents, meanwhile said they had stepped in to fill the income gap and had given their child the most money this year, up from just 9 per cent last year.

The survey revealed the impact Covid-19 and subsequent public health restrictions have had on planning and celebration for the big day with 85 per cent of Communions rescheduled due to the pandemic to either to later in the year or to next year.

Of those children who had spent a chunk of the money already, the most likely purchases were toys, computer games, clothes and sweets with books languishing in fifth place.

On a more positive note, half of the children who made money out of their Communion had already shared some of it with their siblings or donated at least a portion of it to charity, up from 42 per cent last year.

Of that 50 per cent, just under one-fifth said their children had shared some of their Communion money with their siblings, with a similar proportion donating some of it to charity.