‘There is no good evidence for the positive impact of their use,’ group says 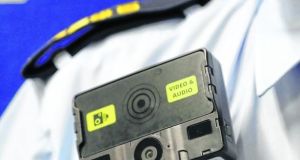 The introduction of body cameras has been requested by frontline Garda groups such as the Garda Representative Association. File photograph: Colin Keegan/Collins

The use of body cameras by the gardaí would most likely be a breach of privacy rights, the Irish Council for Civil Liberties (ICCL) has warned.

The proposed introduction of the body-worn devices, the ICCL said, was “invasive and unnecessary”. The group argued that it had “debunked” seven justifications which had been offered by the state for their introduction.

“ICCL sees no appropriate justification for their obvious intrusion on our privacy. Mass surveillance of the population is extremely problematic. ICCL believes that the infringements to fundamental rights far outweigh the supposed benefits of this technology,” the group said in a statement.

“There is no good evidence for the positive impact of their use and therefore no good reason for their introduction in Ireland. ”

The introduction of body cameras has been requested by frontline Garda groups such as the Garda Representative Association. Minister for Justice Charlie Flanagan has signalled his intent to introduce new legislation to allow for their use. The government this summer approved his plan to bring forward new laws on the issue. Mr Flanagan has noted that the Commission on the Future of Policing in Ireland has found that technologies available to the Garda are outdated, and proposed a strategy for “digital innovation” which included the roll-out of body-worn cameras.

However, the ICCL said that in addition to privacy concerns, a range of other rights could be infringed upon, such as the right to free expression, free assembly and free association. It said the use of the devices could prove a hindrance to community policing.

“Body-worn cameras were first rolled out in the US, where police officers have repeatedly been accused of racist violence including the killing of young innocent black men. Bringing in these cameras in the US was promoted as a way to stop the race-based use of force. That is a very different context from the Irish one, where our police officers are generally unarmed,” said Doireann Ansbro, senior research and policy officer with the ICCL.

Footage from the devices, if used in court, could add unfair weight to the police version of events due to being under the exclusive control of the garda wearing it, the ICCL said. The rights group said that undue reliance on this evidence may impact on the right of suspects to be considered innocent until proven guilty. It said it could find “no evidence” that the technology increases admissions and early guilty pleas”.