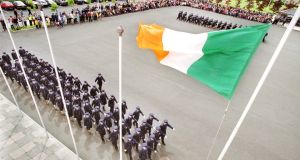 Graduating gardaí at the Garda College Templemore, Co Tipperary. A new report has surveyed 200 active members of An Garda Síochána who identified the top five traumatic stressors in their lives. Photograph: Bryan O’Brien

Up to 11 per cent of serving gardaí may meet the clinical criteria for a diagnosis of post-traumatic stress disorder, while one quarter are showing symptoms of trauma at levels that are “a cause of concern”.

That is according to a study from Trinity College Dublin psychologists Dr Sean O’Meara and Dr Tim Trimble, which will be presented at the Psychological Society of Ireland annual conference in Wexford on Thursday.

The study, The Impact of Traumatic Experience in Operational Gardaí, surveyed 200 active members of An Garda Síochána who identified the top five traumatic stressors in their lives.

These included being called to the scene of a sudden violent or accidental death, witnessing or being the victim of a serious physical assault and being called out to, or being involved in, a transportation incident.

Dr O’Meara said the experience of stress caused the release of hormones in the body that contain adrenaline, which have longer-term consequences for biological as well as mental health. Symptoms, which are common to other chronic stress difficulties, include stomach ulcers, heart disease, irritability, lack of sleep and even flashbacks.

Dr O’Meara said the research under the supervision of junior dean Mr Trimble found 25 per cent of participants had at least “clinically significant” levels of distress. This was made up of 11 per cent experiencing clinically significant symptoms levels, 5.5 per cent of responses suggesting “probable PTSD”, and 8.5 per cent showing a reaction to trauma “sufficient to impact on immune system functioning”. Dr O’Meara said the impact on the immune system could lead to “greater susceptibility to infections such as stomach ulcers”.

Those with PTSD would typically display “avoidance”, a need to avoid certain situations which in extreme cases could be to the point of being unable to get out of bed. They might also suffer “intrusions” where memories of the trauma come unbidden to mind. Those affected may also experience “hyperarousal” in which they are constantly on edge in the expectation of danger. They may also experience an exaggerated “startle reflex” in situations where there is a similarity to the traumatic event.

The research also showed officers repeatedly called out to traumatic events do not get more used to it, but in fact a heightened frequency of high-risk callouts doubles the risk of a traumatisation.

A highly significant relationship was found between frequency of exposure and hyperarousal and intrusion symptoms.

“Additional years of service resulted in modest increases in the odds of symptom exacerbation where moderate traumatisation was present,” said Dr O’Meara. “This study demonstrates that levels of traumatisation in An Garda Síochána are comparable to rates found in other jurisdictions and are a cause for concern. At a time of cultural change in this organisation, officer welfare is critical,” he said.