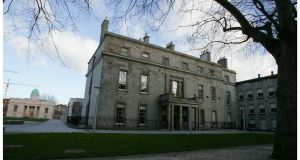 The Department of Education, which entered into a service agreement with Westmeath County Council in relation to the construction of a new building for Curraghmore National School. Photograph: Bryan O’Brien

The design of a new building for a national school in Co Westmeath was changed to accommodate new building regulations, resulting in a doubling of design fees.

The increase in fees, from €221,000 to €446,00 was criticised by the Local Government Audit Service in its recently-published audit of the 2017 accounts for Westmeath County Council.

The council commissioned consultants to design the new building for Curraghmore National School, near Mullingar, in 2013. The council was acting under a service agreement with the Department of Education and Skills.

But in its audit of the council for 2017 the audit service found the bill for design fees had more than doubled from the tender price. The service noted the explanation offered by council chief executive Pat Gallagher was that it was “due to a significant change in building regulations”.

The council said the changes to the initial design had been made “to comply with the obligations under the Building Control (Amendment) Regulations BC(A)R which came into force on 1st March, 2014”.

The council told The Irish Times the initial design brief had been “expanded to include this change which placed increased responsibility on designers to certify works in line with the building control regulations”.

“New responsibilities had to be assigned, including design certifier and assigned certifier. The design team could not have been informed of these duties when the tenders were issued in 2013 and therefore the cost of fulfilling these duties were not included in the initial fees,” the council said.

In his remarks in relation to the 2017 audit, the local-government auditor was critical of the handling of the increase, saying the amount broke procurement rules. “No contract should be exceeded beyond its initial contract amount where that amount exceeds procurement rules,” he said.

Work did not begin on the €5 million project until September 2017 and pupils and staff had anticipated moving in by September 2018. However, due to unforeseen weather and ground conditions the completion date was put back to October 2018 and then to April 2019.

It is understood the contractor had to excavate to a depth exceeding 12m in order to reach solid ground. The additional work was below the water level and carried out during very harsh weather conditions last winter, culminating in an unexpected six-month delay.