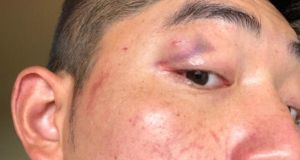 Martin Hong shows a bruise he says he received during a racist attack in Cork earlier this month. Photograph: RTÉ

Gardaí in Cork are investigating an alleged racist attack on two Chinese men by a group of youths in the city earlier this month.

One of the men said he and his friend were verbally abused about the source of the coronavirus before they were assaulted.

Martin Hong (24) said he and Arthur Ma (25) were walking along Pearse Road in Ballyphehane on Cork’s southside at about 8pm on August 8th when they were racially abused by the group. A verbal exchange followed before Mr Ma tried to film the youths. He said they then attacked him and his friend, punching them a number of times in the face and body.

“They were making fun of us but when we asked them to repeat what they were saying, they laughed at us and made fun of us,” he said.

“My friend tried to film it because we did not want to get into any physical contact with them. We asked them to repeat what they said. They said we were racist and were saying bad things about Ireland. they tried to portray themselves as the victims.

“I stepped forward to try to reason with them and one of them just punched me. Both of my eyes got very severely bruised. I got punched in the eye and the nose, my nose was bleeding. I lost one of my teeth and, for one or two minutes, I lost consciousness when I fell to the ground,” he told RTÉ’s News at One

According to Mr Hong, another member of the group attacked Mr Ma before “a very nice old lady” who saw the attack called the Garda.

Gardaí brought the two men to Cork University Hospital where they were detained overnight for treatment before being discharged.

“It happened around my home so I don’t dare to go out from my home. I went out for some shopping yesterday and a teenager said ‘hi’ to me and I was afraid to reply. Before now, all the racial things were verbal – this is the first time I got physically attacked,” Mr Hong said.

“Since this pandemic began affecting the Irish community, the first racist comment I received was from some kids. They were toddlers, they had only learned to speak and they were already racially abusing [people]. They were only kids and that is the shocking part.”

Gardaí confirmed that officers at Togher Garda station are following a definite line of inquiry in their investigation into the incident which it’s understood involved a number of youths, some of whom are in their late teens and others in their early 20s.

Local Cork South Central Sinn Féin TD, Donnchadh O Laoghaire condemned the incident and said the sort of racist abuse that was allegedly shouted at Mr Hong and Mr Ma was not representative of either Ballyphehane or Cork but such abuse has no place in modern-day Ireland.

“I don’t know all the details but it sounds a shocking assault and deeply upsetting for the men involved – the comments that have been reported are very shocking and it appears from reports that the language used was racist and there’s no place for that type of abuse in the Ireland of today.

“To try and scapegoat any ethnic group or nationality for coronavirus and all the pain that it has brought is appalling and reprehensible – I don’t think it’s at all representative of Cork or of the neighbourhood and I hope those responsible are pursued by the gardaí and brought to justice.”

Meanwhile, gardaí in Dublin are investigating an incident in which a Chinese woman, Xuedan (Shelly) Xiong was subjected to alleged racist abuse from a group of youths who pushed her into the Royal Canal near Ashtown last Friday evening.