Funeral of Ruth Morrissey to take place on Wednesday 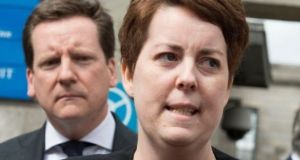 The funeral of CervicalCheck campaigner Ruth Morrissey is to take place in Limerick on Wednesday.

Ms Morrissey (39), who died on Sunday following a prolonged battle with cancer, had sued the Health Service Executive (HSE) and two laboratories over the misreading of smear test results.

An 11am Requiem Mass at the Mary Magdalene Church in Monaleen will be livestreamed and followed by private cremation.

A death notice on Monday said Ms Morrissey had died peacefully at the Milford Care Centre, surrounded by family.

In compliance with current guidelines regarding Covid-19, the funeral will be confined to family and close friends and the house will remain strictly private. Ms Morrissey is survived by her husband Paul and daughter Libby.

Following her death, Mr Morrissey noted that the State had never apologised for what had happened as a result of the misreading of his wife’s smear tests.

“Ruth had a sparkle to her smile, her wit and her intelligence,” he said in a statement issued by solicitor Cian O’Carroll . “That sparkle made her wonderful company and her friendship was a gift she gave generously to anyone who knew her.”

The High Court had heard that Ms Morrissey was not told until 2018 that a review carried out in 2014 showed smears taken under the CervicalCheck screening programme in 2009 and 2012 had been incorrectly reported. Her cancer returned in 2018.

The Quest Diagnostics and Medlab laboratories, as well as the HSE, had appealed aspects of the 2019 High Court judgment of Mr Justice Kevin Cross. This was regarded as a test case concerning the standard of care in cervical screening which has provoked considerable controversy in recent years.

On Monday, cancer survivor Lorraine Walsh, who knew Ms Morrissey, said it was a sad day for the women of Ireland and all those who had been affected by the cervical cancer scandal.

“Ruth was a kind gentle lady. She was a real lady,” she told RTÉ’s Morning Ireland programme. “She fought a really hard battle for herself and for all the rest of us but sadly she lost that battle to this horrible disease.”

Ms Walsh said the State had fought Ms Morrissey every day of her life for the last number of years, bringing her case to the High Court and then to the Supreme Court.

“I am just sad for Ruth that she had to spend so long of the last two years of her life fighting for what was right and fighting for the truth and fighting for justice when she should have been spending that time with her lovely husband and her gorgeous daughter Libby.”

She said that even two years on from the revelations, the HSE and the State continued to fight women in court.

Mr Morrissey, she said, had just “lost his whole life” as a consequence of what had happened and is “bitter and angry I’m sure for being robbed”.