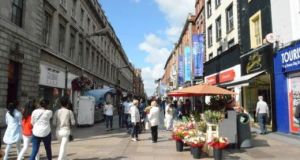 Minister for Finance Paschal Donohoe is understood to be working on a scheme that will offer a tax rebate to encourage people to holiday in Ireland this year. File photograph: Getty

The Government will commit to a spending package approaching €7 billion to boost the State’s economic recovery from the coronavirus pandemic when it publishes its July stimulus plan this week.

Senior sources confirmed yesterday that more than €6 billion – split between straight expenditure for grants and stimulus, tax rebates, and the credit guarantee scheme – had already been committed to.

The figure is likely to rise, with further measures being added when the plan is considered by the Cabinet Committee on Economic Recovery, which is chaired by Tánaiste Leo Varadkar, to be finalised at a full Cabinet meeting on Wednesday.

“It will be at least €6 billion when you include the €2 billion already committed under the credit guarantee scheme. And it could rise to close to €7 billion depending on what is decided [on Monday and Tuesday],” the source said.

Minister for Finance Paschal Donohoe is also understood to be working on a scheme that will offer a tax rebate to encourage people to holiday in Ireland this year.

Mr Varadkar and Government colleagues have given broad indications of what will be included in the stimulus package, including an extension of the Wage Subsidy Scheme and the Pandemic Unemployment Payment until spring next year.

A continuation of the commercial rates waiver is also expected, as well as a larger restart grant for businesses that were forced to close as a result of coronavirus.

There was deadlock in Brussels last night between European Union leaders on the scale of a plan to help drag the continent out of the recession caused by the pandemic. Marathon talks to bridge divisions over a proposed €1.8 trillion package, comprising the seven-year EU budget and a one-off €750 billion recovery fund, have been taking place since Friday.

The summit is one of the longest-running ever, with member states eager to keep trying to find a compromise, given that a failure to do so could spook financial markets and fuel doubts about the efficacy of the EU in times of crisis.

The EU economy is forecast to contract by a record 8.3 per cent this year, with some member states hit far worse than others by the downturn.

The European Commission has proposed a recovery fund of €750 billion, which it would borrow from financial markets and distribute to member states.

The bulk of the money would be given out in grants that do not need to be paid back by national governments but would be recouped through joint EU levies such as a future plastic tax. But the proposal was blocked by disagreements about the size of the recovery fund and how it would be allocated to member states.

Countries including Ireland demanded a change to the system for calculating how much of the funds each member state should get, hoping for a greater proportion. The main objections came from group of “frugal” countries – Austria, Denmark, the Netherlands, and Sweden – which pushed for a more modest package, and for a reduction in the amount of grants, fearing they could incur liabilities and face punishment from domestic voters opposed to monetary distribution in the EU.

Meanwhile, Minister for Public Expenditure Michael McGrath said that in addition to measures announced already, the Government was examining if projects that were “shovel ready” in areas such as transport could be started sooner.

A plan to retrofit 500,000 homes to improve their energy efficiency is also expected to begin earlier than expected, as part of the “green economy” section of the stimulus plan.

Sinn Féin and Labour have already published alternative plans to stimulate the economy with spending commitments of €8.6 billion and €10 billion respectively. Mr Varadkar has said it is the Government’s preference to keep the deficit to €30 billion this year and that there was a limit to the amount that could be spent on stimulus measures.