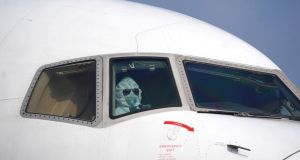 The Chinese embassy in Ireland says “a few” of its citizens have placed themselves in “self-isolation” after returning from China, in accordance with the requirements for epidemic prevention.

Those affected are inspecting their own physical status, including body temperature, respiratory condition and other possible symptoms of the disease, an official said.

As the death toll from the coronavirus outbreak in China reached 106 on Tuesday, the embassy in Dublin said it was willing to help and “facilitate” the Government to evacuate Irish citizens from the country.

While the Department of Foreign Affairs has said it is preparing to evacuate Irish people trapped in Hubei province, at the epicentre of the outbreak, it had no update on its plans on Tuesday.

The United States, France and Germany are among the countries who have announced plans to evacuate their citizens, and British citizens are expected to leave as early as Thursday.

The Chinese embassy said it was working closely with the Department and the Health Service Executive “in regard of issues related to the novel coronavirus”.

“The embassy has published several notices to the Chinese community in Ireland, urging them to raise the safety consciousness and co-operate with Irish health authorities’ prevention and control measures,” it added.

The presence of a tour group from Hubei in Ireland last weekend has caused concern among the local Chinese community, but the embassy pointed out that China has now suspended outbound group tours in order to cut off the spread of the virus.

The embassy said China has sufficient capability, resources and confidence to “conquer” the virus, and was taking an “open, transparent and highly responsible” attitude toward global health and safety.