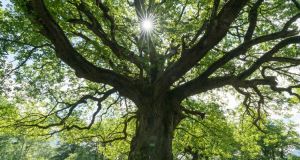 An oak tree will draw down enough carbon to offset 198 flights from Dublin to London in its lifetime. Photograph: Getty Images

There’s no doubt that trees are important to the environment, but nobody knows this more than a group of primary school children from Malahide and Portmarnock Educate Together.

The fourth class pupils spent Monday morning measuring trees, to establish how much carbon they can absorb, and how many trees are required to offset their emissions.

Using a tape to measure the circumference of the trees in St Stephen’s Green, they roughly calculated the carbon embodied in the tree both above ground and below ground.

They found that throughout its lifetime an oak tree will draw down enough carbon to offset 198 flights from Dublin to London.

Sam Harrison (10) said it was an important experience because he wants to learn how to “save the planet from climate change”.

“I don’t want my future and everybody else’s to just be miserable. I’m quite worried about it. Nobody really wants that,” he said.

Ciara O’Connor said it is important for young people to learn about these things because it will lead to action.

Speaking about a lack of environmental education, she said: “When you grow up, you might not think it’s important and you might stop caring and not do anything about it.”

Luka Simic (10) said he wants to see more trees being planted because he doesn’t want to earth to be like a “stinkbomb”.

“I think planting more trees could help. People are all obsessed with their phones and these kind of things and they don’t bother wasting their time on things like trees or they don’t know about it. It’s very important. The government isn’t listening at the minute, they just care about money,” he added.

Ilmur Jonsdottir (9) said planting more trees is important to her because she is already seeing climate change in action.

“Where I live, there have been so many floods. Like one day we were trying to get to our house, the road was so flooded that we couldn’t get to our house so we had to park and then walk there,” she said.

“ Some people are [listening[] but other people are like ‘no, I’ve got more important things to worry about’. It makes me sad and mad to know that people don’t even care.”

The event was organised by Future Earth Ireland and Easy Treesie, a tree planting project.

Diarmuid Torney, chairman of Future Earth Ireland, said the aim of the event was to illustrate to the children how they can take action.

“We’ve seen over the last year or so, through the school strikes, that children are increasingly worried, concerned about climate change and sustainability. Part of the aim of this morning is to give them more information about climate change,” Mr Torney said.

“It’s also solutions-focused so it’s about what we can do. There is increasing concern about eco-anxiety, about children being worried, and the best antidote to that is showing children and grownups what they can do to make a difference.”