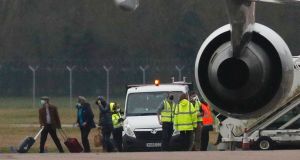 British nationals evacuated from Wuhan in China are helped by personnel as they disembark at the Royal Air Force station in Carterton, west of London, on Friday. Photograph: Adrian Dennis/AFP via Getty Images

Ireland’s health service remains on high alert for a case of the new coronavirus after the first two people diagnosed with the disease in the UK were placed in isolation on Friday.

While no confirmed of suspected cases of the virus have at yet been identified in the State, experts say an Irish case is now more probable than possible.

Dr Jack Lambert, an infectious diseases expert at the Mater hospital in Dublin, said the virus “probably” would make it to Ireland, given the cases of human-to-human transmission that have occurred in countries outside China, such as Germany.

“Whether it goes on to cause hundreds of infections remains to be seen at this point,” he added.

The two people diagnosed with the virus in the UK had recently travelled from China and had taken ill while staying in York. The pair are being treated in a specialist unit of a hospital in Newcastle, while experts try to contact anyone who was in contact with them.

The number of confirmed cases has risen more than ten-fold in a week, with almost 2,000 cases recorded in the past 24 hours. The vast majority of the cases are inside China; but about 100 cases have been confirmed in 19 other countries.

An evacuation flight carrying 83 British citizens and 27 people from other countries – including three Irish – arrived in England on Friday from Wuhan, the Chinese city at the centre of the outbreak. The passengers have been placed in quarantine for 14 days.

A spokesman said the department was liaising with the Health Service Executive (HSE) and would adopt a “pragmatic” approach in relation to people whose visa and immigration permissions were coming to an end.

There is no evidence of a risk of contracting the virus from packages sent from China, the HSE has said. Usual hygiene measures, including handwashing, should suffice, the Health Protection Surveillance Centre said in an advisory note.

It says a group reviewed evidence on the effectiveness of doing temperature checks on all incoming passengers at Irish airports but decided “this was not an appropriate control measure for Ireland at this time”.

If an Irish outbreak were to occur, employees might be required to tell their employer of any symptoms of poor health, lawyer Julie Galbraith, a partner at Eversheds Sutherland, said.

She added that the suspension of non-essential travel, spreading teams across several locations so as to improve operational resilience and providing hand sanitisers for staff were other possible elements of a proportionate response to an outbreak.

Ms Galbraith said employers should consider flexible working, including allowing employees to work from home in order to reduce the risk of infection.

Where employers ask staff to remain at home even if they do not have symptoms, they should be paid, she said.

“All employers have a duty of care toward staff. This means that employers must consider whether their existing arrangements take account of the risk of harm arising from the coronavirus.”