Tree of remembrance has attracted 220,000 people to share their grief since 2014

The installation 'Fallen' is suspended from the ceiling of St Patrick's Cathedral in Dublin and commemorates lives lost in wars. Video: Enda O'Dowd 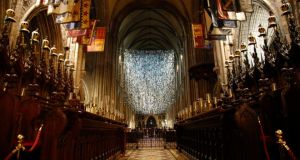 In the summer of 2014, just before the beginning of the centenary of the first World War, the tree of remembrance was installed in St Patrick’s Cathedral, Dublin.

This installation was meant to resemble the blasted, withered trees of the first World War battlegrounds. It was surrounded by barbed wire.

Some 36,000 of those messages were chosen at random and hanged from the ceiling of the cathedral, each one representing an Irish life lost in the war.

A team of dedicated volunteers met twice a week between July and November threading the messages into 8.5m lengths of fishing line – creating 819 strands in total, stretching to some 6.5 km.

Since its creation, the tree of remembrance has morphed into something different. It has become a repository of general grief with messages left in many languages.

The messages, resembling the leaves of a tree, are piled up around the bottom of the installation.

“My brother Brendan – I live every day to make up for the life you were unable to live,” one woman wrote. Another remembers Russell Chase “a kind man who lost his life in Vietnam”.

Minister for Heritage Josepha Madigan on Thursday left her own message, dedicated to all those who died in the first World War. It was from the Persian poet Rumi.

“Out beyond ideas of wrongdoing and rightdoing there is a field. I’ll meet you there.”

Installation artist Ciara Ní Cheallacháin said the tree is a reminder that people are still being affected by violent conflict 100 years after the end of the first World War.

“It is a much bigger response than we ever expected. It has become an important part of the visit to the cathedral for a lot of people,” she said. “When you talk to our tour guides, they will tell you that it is something that people immediately respond to in a way that we never anticipated they would.”

The installation is one of many commemorations to mark the centenary of the end of the First World War.

The 6m high installation, made of scrap metal will be installed in St Stephen’s Green on Saturday for the duration of the Armistice commemorations. The Hauntings Soldier is made by the blacksmith and artist Martin Galbavy at his forge near Sherborne in Dorset. It is being brought to Ireland by lawyer Sabina Purcell who has long had an interest in the first World War. She has secured the support of both the Department of Culture, Heritage and the Gaeltacht and the Office of Public Works to erect it in the Green. Nolan Transport is transporting the Hauntings Soldier from Dorset and the engineering contractor Sisk is putting in the foundations. The Hauntings Soldier will be in St Stephen’s Green until November 24th.

The port will also unveil a plaque to the workers of the Dockland Ammunition Factory which was located at the port during the first World War.

The National Library of Ireland has announced a programme of events, comprising talks, tours and lectures which will run from Sunday, November 4th to 10th. It will be headlined by a production by award-winning composer Michael Holohan, and also features short pop-up talks in the NLI’s World War Ireland exhibition.

Drawing on the personal letters and diaries of both his paternal and maternal granduncles and the diary of a British soldier, ‘Gallipoli, the GPO and Flanders’ will see Michael Holohan take visitors on a musical and literary journey.

Performers will include actor Barry McGovern, playwright and actor Donal O’Kelly and the RTÉ ConTempo String Quartet. This free event will take place on Sunday, 4th November at 3pm.

Among the lecturers will be historian and writer Tom Burke on the commemoration of the first World War in Ireland and NLI staff member and historian Maeve Casserly on WW1 recruitment propaganda posters and women and work in WW1.

UCD Library will host an online exhibition using archives, publications and recorded interviews held in the collections of UCD Archives, UCD Special Collections, the National Folklore Collection, and UCD Digital Library. It will be on the Google Arts and Culture platform and will go live on November 9th when UCD is planning various events to mark the Armistice.

On November 11th, at 11am, the Connaught Rangers Association are holding a service of commemoration in the grounds of King House Boyle. Afterwards a memorial will be unveiled to commemorate the 127 men of the Boyle area who did not return from that war. Amongst the many names on the memorial to be remembered are four brothers, the Wynnes from Green Street and later Eaton Terrace in Boyle who were all killed in the war.

On Saturday, November 17th, the Western Front Association Dublin branch will host their annual conference which will examine the aftermath of the first World War in Ireland. Tara Doyle will discuss bereavement in Dublin during the Great War, Nigel Henderson will address how the Armistice was reported across Ireland, Thomas Murphy will discuss returning prisoners of war and Trevor Adams - the aftermath of WW1. http://wfadublin.webs.com