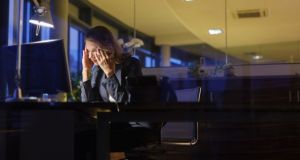 Almost 85 per cent of Irish people are happy or fairly happy with their work life balance, according to a Eurobarometer study. File photograph: iStock

Irish people appear to be happier with their work/life balance than the typical EU worker although women are slightly less satisfied than men, a new EU-wide survey has suggested.

According to the findings of the latest Eurobarometer survey, 34 per cent of Irish workers are very satisfied with the balance between their work or studies and their personal life while a further 50 per cent described themselves as fairly satisfied.

All told 15 per cent said they were dissatisfied. When the survey is opened up to all EU workers, the number of employees who say they are unhappy with their work/life balance climbs to 20 per cent.

On a wider level, only 42 per cent of EU works have made use of flexible working arrangements with flexitime being the most common form of flexible work pattern on the table followed by part time work.

A quarter of Europeans said it was difficult for employees in their workplace to take family leave, while a similar proportion said employees were usually discouraged from doing so

“It is great to see that Irish people in general are satisfied with their work/life balance but I do think there is more to be done to support workers,” said Deirdre Clune, MEP for Ireland South.

“Employers must to do more to support women and men in the workforce. The cost of childcare is a major issue for working parents and this is something the current Government is focused on. It is important that businesses play their part too,” she said.

She added that for women in particular returning to the workforce after having children “can be tough and this affects the whole family. I would encourage employers across Ireland to put in place supports for ensuring women and men have more options available to them for flexible work practices should they require them.”