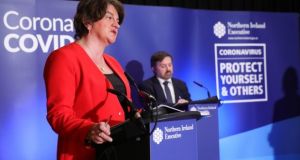 The North’s First Minister has defended the decision to introduce tough new lockdown measures to limit the spread of coronavirus only a week after less stringent measures were blocked by her party.

Ministers agreed on Thursday to a two-week shutdown from November 27th which will close hospitality, churches and non-essential retail.

Arlene Foster said the Executive had received new medical advice around the reproduction (R) number and the number of people in hospital. This was, she said, “all new information, and it’s in that context we had to make the decision.

“We only do what is necessary, unfortunately what we’re having to do next week is necessary, and that’s why we have to take those very, very difficult decisions,” she said.

The change in stance comes only a week after the DUP twice used a controversial cross-community mechanism to prevent the extension of current restrictions.

The bitter and damaging split in the Executive resulted in a reluctant compromise which extended the measures until Friday, when cafes and close contact businesses were allowed to resume trading.

This was to have been followed by the complete reopening of hospitality businesses from November 27th, which has now been scrapped.

Business owners expressed anger and frustration that cafes and close contact businesses, which reopened on Friday under the limited relaxing of the rules agreed last week, will now be required to close again after only a week.

Concerns have also been raised that the one-week window for shops, cafes and close contact services to remain open will encourage a rush of shoppers.

The Archbishop of Armagh and Primate of All Ireland Eamon Martin said the unexpected news announced late on Thursday night that churches across Northern Ireland are to close for two weeks from November 27th has come “as a great disappointment, and is contrary to the assurances given to faith groups at a meeting just last week at which we were praised for our attention to safety and public health”.

He added: “Our parishes have consistently tried to support the Executive and public health authorities and we will do so again, but we would prefer to do so in mature partnership and dialogue.

“The Catholic Church always wishes to protect health and life and promote the Common Good and therefore will continue to play its part in making the necessary sacrifices, but we urgently request that the ban on public worship will be for the shortest period possible.”

He sought urgent clarification on the question of whether churches may open for individual visits and private prayer.

“I cannot understand how a person may still go to an off-licence to buy alcohol but might not be permitted to visit and sit in quiet solitary prayer in a large church,” he said.

He noted the restrictions will coincide with the beginning of the holy season of Advent, a sacred time of preparation for Christmas. “I urge the Executive to accept that for many people a ‘meaningful Christmas’ is about more than shopping, eating and drinking. Spiritual preparation is essential”.

The chief executive of Hospitality Ulster, Colin Neil, said the change in the rules was a “disaster” and the sector needed an urgent financial rescue package.

“All trust in the Executive by the hospitality sector has been wiped away,” he said. “We were told that Christmas trading would be saved, that is now gone . . . We have been left with no trade, no hope and a huge amount of redundancies on our hands.”

Twelve further coronavirus-related deaths were reported by the North’s Department of Health (DoH) on Friday, bringing the total number of fatalities to 913. A further 369 people were confirmed to have the virus.

Speaking to reporters on Friday, Ms Foster justified her party’s change in position and said the evidence had changed. While Ministers did not want to introduce further restrictions because they “realise the impact it will have . . . it was necessary, unfortunately, to protect our health service.”

She said the Minister for Health Robin Swann had brought forward evidence that the R number was higher than had been hoped - at 1 rather than between .8 and .9 - which “causes us concern in terms of transmission of the virus.

“The numbers are staying pretty static in relation to positive cases at present, but when we look at our hospital numbers they are at our highest they have been,” she said.

“In the first peak in March and April, the numbers in our hospitals reached around 350, now they’re at 450, so our health service [WORKERS]are very tired, we understand that, so there was a need to put in these interventions.”

However the Minister for Infrastructure Nichola Mallon of the SDLP disputed this, saying the situation had not changed and ministers had been advised five weeks ago to impose a six-week lockdown.

“The regrettable thing is that we should have been taking decisions like this long before,” she told the BBC. “We should not have had the shambles of last week and the distress that has caused to businesses and people, but we have got the right decision now and it’s very clear that we need to be putting financial support packages in place.”

The Deputy First Minister, Sinn Féin’s Michelle O’Neill, also defended the new restrictions, saying the decision was “difficult” but was taken “on the back of strong medical and scientific advice, and was necessary.”

The chair of the British Medical Association in Northern Ireland, Dr Tom Black, welcomed the decision but said it should have been taken five weeks ago.

“We need this lockdown if we are going to take the pressure off the hospitals. The hospitals are at breaking point,” he said.

“The decision that was made five weeks ago was the wrong decision, it was not severe enough at the time and it needed to be taken earlier.

“We should have brought in more severe measures five weeks ago if we were going to stop this happening now. It’s happened, we have a lot of hard work to do.”– Additional reporting - PA