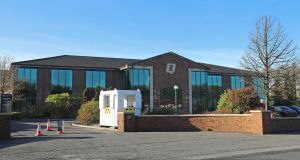 The search operation was conducted as part of the Criminal Assets Bureau’s investigation into events including the harassment of senior officials of Quinn Industrial Holdings which has offices in Derrylin Co Fermanagh. File photograph: Liam McBurney/PA Wire

The investigation is focusing on an organised crime group operating in the border region which is suspected to be behind a campaign of intimidation against the company and its senior staff.

This campaign began with harassment before escalating in 2016 to criminal damage, extortion, assault, kidnapping and blackmail.

The most serious incident came in September 2019 when Quinn Director Kevin Lunney was kidnapped outside his home in Co Fermanagh before being tortured and left at the side of the road in Co Cavan.

On Friday morning officers from the Criminal Assets Bureau (CAB), supported by the Emergency Response Unit, the Garda Stolen Motor Vehicle Investigation Unit and the Revenue Customs Dog Unit searched several premises in Dublin and Cavan as part of their inquiries.

Searches were carried out on residential homes as well as businesses. Evidence seized includes a variety of electronic devices such as mobile phones and computers, and financial and property documents, the Garda said in a statement.

“Today’s searches are a significant development in the CAB investigation.”

Cab said it is focusing on seizing the assets of the organised crime group responsible for the attacks on Quinn executives. The gang is believed to be involved in a wide range of criminal activity including smuggling, car theft and extortion from communities on both sides of the border.

“This search operation was conducted as part of the Criminal Assets Bureau’s investigation into events which commenced circa January 2015, which include the harassment of senior officials of a commercial entity known as Quinn Industrial Holdings, which escalated from 2016 onwards to include criminal damage, assault causing harm, false imprisonment, blackmail and extortion,” it said.

Quinn Industrial Holdings was originally founded in 1973 by local businessman Sean Quinn and went on to become a major local employer.

Mr Quinn lost control of his businesses in 2011 over a multibillion euro bet on the share price of Anglo Irish Bank, which collapsed in the 2008-09 financial crisis.

The subsequent takeover of the company by an international consortium caused significant anger in among some local people. In September the company rebranded itself as Mannock.