Dubliner served as European commissioner, in UN role and had extensive business career

In this video Peter Sutherland, who has died age 71, addresses the migrant crisis during his time as special representative of the United Nations Secretary general for migration and development. 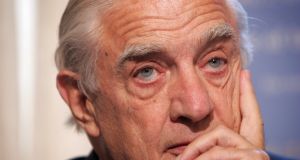 Peter Sutherland, the former European commissioner, attorney general and chairman of Goldman Sachs International, has died. He was 71.

Mr Sutherland served in a number of senior positions in the worlds of law, business and government during his career. Most recently, he was the United Nations special representative for international migration.

In a long career, he also held the positions of director general of the World Trade Organisation; chairman of the London School of Economics; a member of the UN commission on human security; chairman of the European Institute of Public Administration and chairman of British Petroleum.

Born in Dublin in April 1946, Mr Sutherland was educated at Gonzaga College in Ranelagh before going on to study law at University College Dublin. He worked as a senior counsel for more than a decade before being appointed attorney general in 1981 by the Fine Gael-Labour coalition, the first of two spells in the role.

Mr Sutherland, who had been ill for some time, passed away on Sunday morning in St James’s Hospital in Dublin. He is survived by his wife Maruja (née Cabria Valcarcel) and his children Shane, Natalia and Ian, 10 grandchildren, his sisters Jill and Karen, his brother-in-law David Brennan and his wider family and friends.

In a statement, his family said that Mr Sutherland suffered a cardiac arrest in London on September 11th, 2016 on his way to Mass at Brompton Oratory.

“He was substantially impacted by this and was in hospitals in London and Dublin since then. Despite great efforts by his medical staff and his own indomitable spirt, he succumbed to an infection,” the family said.

“We were also so proud of his patriotism whether manifested through supporting his beloved Irish rugby team, his support of education at Gonzaga, UCD, Trinity or elsewhere, his formal and informal service to Irish governments of all hues and his work with the Ireland Fund of Great Britain which he was proud to chair and support.

“Others noticed his success in public life and his material success from business. We loved Papa because he was devoted to us and we to him.”

Leading tributes to Mr Sutherland, President Michael D Higgins commended his efforts in “tirelessly campaigning for global solutions to human trafficking and forced migration” while working with the UN.

“He became a passionate and influential voice for the rights of the 65 million people who have been forced to flee their homes and homelands,” he said.

“A passionate European, throughout his career Peter Sutherland remained deeply committed to peaceful cooperation and integration in Europe, promoting greater awareness of the importance and possibilities of Irish engagement in European decision making.”

Taoiseach Leo Varadkar said Mr Sutherland was “a statesman in every sense of the word; an Irishman, a committed European and a proud internationalist”.

“Throughout his life, he was a champion for individual and economic freedoms. RIP,” he said in a Twitter post.

“His intellect was extraordinarily (and) he used his talents to be one of Ireland’s most influential people, in business, politics (and) human rights globally.”

Jean Claude Juncker, the president of the European Commission, said Mr Sutherland was a “true European” in every sense.

“He believed strongly in the work of the European Union and other international organisations and their importance for cooperation and international dialogue.”

“A true patriot who had the interests of Ireland at heart. Sincere sympathies to his family,” he said.

“Peter was an Irish giant on the international stage but a man who never forgot where he came from. While we may have had political differences his commitment to internationalism and multilateralism through his career was consistent and deeply felt.”

“Peter was especially proud of his initiative in setting up the Erasmus student exchange programme, which has had a profound and beneficial effect on the lives of hundreds of thousands of young Europeans,” he said.

“He was a man of faith, who showed, through his life, that faith and modernity can be reconciled. His talents brought him great success, but he was always conscious of his responsibility to help others and give back to society.”

Paul McGarry, chairman of the Bar of Ireland, said he was “saddened to hear of the death of our great former colleague and AG Peter Sutherland SC”.

Former Fine Gael minister Gemma Hussey said she was saddened to hear of Mr Sutherland’s death. She described him as “a truly great man, wonderful AG and colleague, who shone on the international stage.”

Mr Sutherland’s funeral will take place at 11am on Thursday morning in the Church of the Sacred Heart, Donnybrook, Dublin 4, followed by burial at Kilternan Cemetery Park.