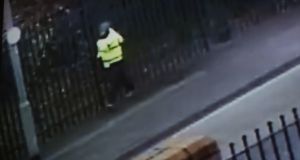 A still from CCTV footage issued by the PSNI of the suspected gunman who murdered Jim Donegan on the Glen Road in West Belfast on Tuesday. Photograph: PSNI/PA Wire

The PSNI has appealed for assistance in identifying the gunman who shot dead 43-year-old James Donegan outside St Mary’s grammar school on the Glen Road in west Belfast on Tuesday afternoon.

On Wednesday evening police released footage showing the gunman walking towards the school and later running away after he had shot Mr Donegan.

He is seen wearing a high visibility, hip-length yellow jacket, with “security” written on the back, dark trousers, and a grey hood or hat and carrying a black or dark bag over his shoulder.

He emerged from a lane in Clonelly Avenue onto the Glen Road around 3.10pm and walked past several parents and children before firing eight shots at Mr Donegan while he sat outside the school in his red Porsche Panamera, registration JDZ34, waiting to collect his young teenage son.

Around two minutes later, after the murder, the gunman is pictured running back up Glen Road and back along the lane into Clonelly Avenue.

Detective Chief Inspector Pete Montgomery said he believed the gunman was carrying the murder weapon in his bag.

“Jim was a husband, a brother, a father to two sons and a stepfather. Yesterday, as the school bell was ringing, a lone gunman shot Jim, as he sat in his car waiting to pick up his thirteen year old son,” said the senior investigating officer.

“Hundreds of children were pouring out of the three schools in the Glen Road area of West Belfast at the time - many of them witnessing the assassination. Jim’s son was spared from this thankfully, but only by a few seconds,” added Det Chief Insp Montgomery.

“Mums, dads, grandparents, young siblings, and people in the community also saw the brutal slaying. The callous actions of the gunman will have catastrophic psychological effects on them all,” he said.

Added Det Chief Insp Montgomery: “Children who moments before were no doubt enjoying Christmas activities in class, maybe practising for their Christmas concert or school nativity, will no longer be dreaming about Santa or presents. Instead they will be having nightmares about a murder in broad daylight outside their school, a place which should be a safe haven to learn and grow.

“The gunman walked past these children and fired a weapon eight times. It is utter madness as any one of these bullets could have ricocheted and having been at the scene I cannot emphasise enough that it is sheer luck I am not investigating multiple fatalities.”

The officer urged anyone who saw the gunman to come forward to police. “I am appealing to the community to help identify who murdered Jim and put the lives of countless children at risk,” he said.

The Bishop of Down and Connor, Dr Noel Treanor said the murder of Mr Donegan left “family members, young people and the wider community in shock and distress”.

“There is no place in a civilised society for such vicious and hostile actions which endanger the lives of all within the community, especially the children and young people who were making their way home from the safety of their schools,” he said during a Christmas carol service in St Peter’s Cathedral in west Belfast on Wednesday night.

Bishop Treanor said “the beauty and message of these carols stands in marked contrast to the violent and callous murder of Jim Donegan”.

On Tuesday Chief Supt Jonathan Roberts said that dissident republican involvement was one line of police inquiry, while some local sources also blamed dissidents for the murder.

On Wednesday there were some reports of the killing possibly being linked to the Kinahan-Hutch gangland feud.

A senior police source said on Wednesday evening that it was too early to say if there was such a connection.

Mr Donegan originally from west Belfast lived in Co Down and ran a haulage firm.

Fiona Crookes, the interim principal of St Mary’s, described how she and other teachers “took off coats, cardigans and things like that and put them round the windows of the car” so the children leaving the school couldn’t see the murdered man.

Teachers also had to act quickly to protect and comfort Mr Donegan’s son as he waked to meet his father. “We got him, we brought him back to school and the police let his mum through the cordon,” she told BBC’s Good Morning Ulster programme.

“His poor wee face was shocking – it is absolutely horrific,” she said.