Varadkar: Confidence and supply talks going on ‘longer than I would like’ 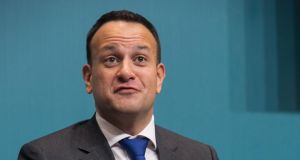 Taoiseach Leo Varadkar: ‘I have given the Independents my commitment that Fine Gael will not sign off on a new confidence and supply agreement or renewal without them also being happy with it’ Photograph: Gareth Chaney/Collins

Talks on the confidence and supply agreement between Fine Gael and Fianna Fáil are going on longer than Taoiseach Leo Varadkar would like, he has told the Dáil.

But he respected the fact that Fianna Fáil wanted an in-depth review of Government departments and “I think eight or nine departments have been reviewed”.

Mr Varadkar repeated his belief that there should be no election until summer 2020 to ensure Government stability so they could “get through the entire Brexit period and perhaps most of the transition period”.

He said he was very keen to talk about the “nitty gritty” of what the Government and Oireachtas could do on a range of issues including the economy, health, housing, infrastructure and climate change.

“The talks are going on longer than I would like but I respect the fact that Fianna Fáil wants to do a detailed and in-depth review of what is happening in different Government departments and I respect its wish that this be done.”

Both he and Fianna Fáil leader Micheál Martin hit out at Sinn Féin leader Mary Lou McDonald who had asked “could the Taoiseach or even the leader of Fianna Fáil enlighten the rest of us as to the state of play”.

Ms McDonald also asked if the Independent Ministers were part of the talks or “are they in the dark about all of it like the rest of us?”

She said that both Fine Gael and Fianna Fáil “talk a lot about stability and certainty, not least because of Brexit, yet we have this most uncertain of situations”.

Mr Martin told her that “this jurisdiction has a Government and this House facilitated its formation unlike Northern Ireland which has been without a government for two years, a record length of time”.

The Taoiseach said while the confidence and supply talks had been ongoing for a long time “they have certainly not gone on as long as the DUP-Sinn Féin on-and-off talks”.

He told Ms McDonald that “it is always better to talk than not talk when it comes to getting things done for our citizens”.

And he added that “the DUP and Sinn Féin now hold the international record for failing to agree a government and form a coalition”.

Mr Varadkar said the Independents in Government are not involved in the talks because it is an agreement between Fine Gael and Fianna Fáil.

“But I have given the Independents my commitment that Fine Gael will not sign off on a new confidence and supply agreement or renewal without them also being happy with it.”

He pointed out that Fine Gael had already negotiated a five-year programme for government with the Independents.

The Taoiseach told Labour leader Brendan Howlin that the Government does not have any agreement with former minister for communications Denis Naughten “at present”.

But he said that “as is the case with all Independents we do our best to assist them with queries they may raise, particularly about their own constituency”.