Flybe workers call for effort to save routes during Stormont protest 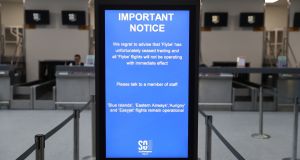 Flybe workers’ representatives in Northern Ireland have urged the British government and the Northern Executive to provide funding to secure routes out of George Best Belfast City Airport and to safeguard jobs. Photograph: Andrew Matthews/PA Wire.

Flybe workers’ representatives in Northern Ireland have urged the British government and the Northern Executive to provide funding to secure routes out of George Best Belfast City Airport and to safeguard jobs.

About 200 Flybe workers, supporters and airport staff gathered for a demonstration at Stormont on Wednesday to call for action to maintain routes to airports in Britain following the company ceasing trading.

Flybe operated 14 routes out of the Belfast City airport, which accounted for about 80 per cent of the airport’s scheduled flights.

Belfast City Airport has expressed some confidence that most or all of the routes will be taken up by other airlines, and are in negotiations to that end. It announced on Wednesday night that Eastern Airways is to operate a service to Southampton, which previously was run by Flybe.

Mr Brash said that while Loganair was taking up two of the routes - to Aberdeen and Inverness - and while airport managers were hopeful other routes would be acquired by other airlines, he was concerned that Belfast City Airport would lose its position as a base for the routes.

“The airport authorities and Stormont must ensure that any airline wanting to take on routes does not cherrypick but commits to take them all on and establish a base at the airport. That’s the only way to guarantee regional connectivity and secure jobs,” he said.

“Flybe’s collapse resulted in a workforce here of 190 being made redundant overnight and posed a direct threat to the long-term sustainability of Belfast City Airport.

“The airport plays a critical role in securing the economic connectivity of the metropolitan area. It also accommodates vital organ transit, the transportation of patients for medical treatment and allows family members to stay connected.”

Mr Brash said the British government and the Northern Executive must act to provide subsidies so that the routes can be secured.

Meanwhile, Ulster Unionist Party peer Lord (Reg) Empey said the British government must take “urgent action” to ensure Northern Ireland’s air connectivity with Britain is maintained in the wake of the collapse of Flybe. He also called for financial support.

“Whilst I hope it will be possible to achieve a restoration of most routes through normal commercial means, I am sure that some routes will require economic incentives, especially in the current atmosphere and circumstances (of Covid-19),” said the former UUP leader.

“Some routes will be very difficult to restore, in part due to the current economic crisis in the industry created by the coronavirus, and of course, the future viability of some airports in Great Britain”.