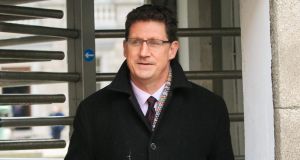 Green Party leader Eamon Ryan. The party says its membership base just two years ago was about 700 but has since increased to more than 2,700. Photograph: Gareth Chaney/Collins

The Green Party has seen its membership increase almost fourfold in the past two years, and two-thirds of those people will need to ratify the party’s participation in any future government.

The party says its membership base just two years ago was about 700 but has since increased to more than 2,700.

Party rules stipulate that while the parliamentary party can negotiate “political arrangements with other parties” this is “subject to ratification by a special national convention of any decision to participate in a government”.

The rules also say that any such decision must be carried by a “two-thirds majority of those present and entitled to vote excluding abstentions”.

As well as the Greens, Fianna Fáil, Sinn Féin and Fine Gael also need the approval of special party conferences to enter government.

The holding of such conferences, if required, is likely to be made more difficult by the ongoing coronavirus crisis.

Senior figures across the main parties have yet to decide how to approach these conferences if mass gatherings are prohibited, although there have been some suggestions that postal ballots could be organised.

Since both Sinn Féin and the Greens are run on an all-island basis, members and delegates from Northern Ireland would also have a say at their special conferences on government formation.

The Fianna Fáil rules stipulate that a special ard fheis must be held to ratify a proposed programme for government. The ard fheis is run on a one member, one vote system and the matter to be voted on is the policy programme, rather that the proposed composition of the government.

The party has about 18,000 members and each would be entitled to vote if they turned up at the ard fheis. The prospect of entering government with Fine Gael has provoked some opposition among the Fianna Fáil grassroots and has led to expectations of a stormy special ard fheis, if one is called.

Rather than giving every member a vote, Fine Gael requires a special delegate conference to decide its participation in government or a confidence-and-supply-style arrangement.

The vote is also carried out on a weighted, electoral college basis. TDs, senators and MEPs make up 50 per cent of the voting strength, followed by 25 per cent for constituency delegates, 15 per cent for councillors and 10 per cent for the executive council.