Russian bombers in Irish airspace for second time in days 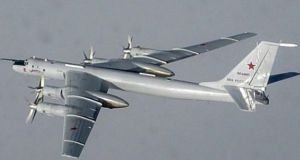 British RAF fighter jets were on Wednesday scrambled for a second time in the space of days to intercept Russian bomber planes entering Irish-controlled airspace off the west coast. File photograph: British Ministry of Defence.

British RAF fighter jets were on Wednesday scrambled for a second time in the space of days to intercept Russian bomber planes entering Irish-controlled airspace off the west coast.

The Department of Transport confirmed commercial and private flights over the Atlantic had to be warned about the Russian military aircraft, which were flying without making contact with air traffic controllers.

“The department can confirm that it was advised this morning of what is termed unidentified radar tracks in an area of international airspace in the North Atlantic oceanic region controlled by the Irish Aviation Authority,” a spokesman said.

“At all times these radar tracks remained outside Irish sovereign airspace.

“Such tracks indicate aircraft activity and in such events the air traffic controllers will and did on this occasion inform civil aircraft in the wider area.”

The department said it would not “speculate as to the identity of the aircraft” but warned that such “unscheduled activity in airspace which primarily facilitates civil aircraft is unwelcome”.

The RAF confirmed it launched quick reaction alert Typhoons from RAF Lossiemouth in northeast Scotland to monitor two Russian Tu-142 Bear maritime patrol aircraft bombers “while they were in the UK area of interest”.

They tracked the Russians to the Bay of Biscay, where the French intercepted, before they turned back north again.

Air Chief Marshal Mike Wigston, Chief of the Air Staff, said the bombers “do not comply with international air traffic rules, are a hazard to airliners and are not welcome in our airspace”.

“RAF Typhoons, alongside our Nato allies, ensured these Russian aircraft posed no hazard,” he added.