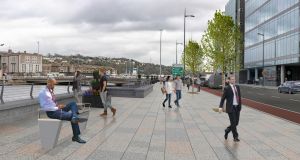 Plans for the controversial €140 million Lower Lee Flood Relief Scheme will create some 8kms of new or improved riverside walk and cycleways, according to a Cork city councnil.

The scheme, which is designed to eliminate the risk of flooding in Cork city, has been drawn up by Office of Public Works and is the result of over 13 years of study of the Lee Catchment.

The area extends for approximately 15kms from west of Ballincollig to the eastern end of Cork city centre island.

However, the scheme has proven highly contentious with the Save Cork City Group criticising its use of flood walls along the city quays, saying that it will reduce public access to both the north and south channels of the Lee.

But the OPW and Cork City Council have refuted the suggestion that the scheme will reduce access to the river and said that public consultation has helped the project evolve to a point where there is significant public access.

“It is hoped that the publication of further detail and images will assuage genuine misunderstanding about the Scheme and also challenge significant misrepresentation of it as well,” said the OPW and Cork City Council

“While the scheme cannot deviate from the comprehensive scientific and empirical analysis on which it is based, it has taken into account many of the suggestions made during the public consultation stages.”

According to the OPW and Cork City Council, the scheme, which represents the largest public investment in flood protection ever undertaken in the state, has been successfully benchmarked against best international practice.

“And its multifaceted approach takes account of the complexity of flooding in Cork which is both tidal and fluvial and will defend the city against flooding which in 2009 and 2014 caused a reported €140 million worth damage.”

According to the OPW and Cork City Council, 900 homes and 1,200 businesses will be protected by the scheme while, at the same time, the Lee will be more open for usage through additional access points, pontoons and moorings.

“About two thirds of public river frontage will have open railings after the Scheme is completed and it will create approximately 8km of new or improved riverside walk and cycleways from the Lee Fields to the city centre.”

A key element is a state-of-the-art flood forecasting system, which with revised operating procedures to regulate Inniscarra and Carrigadrohid dams, will significantly reduce the peak flow of water reaching the city at times of flood.

The flood relief scheme also involves the creation of washlands upstream of the city, an enhanced early flood warning system, diversion of waters from the south channel of the Lee into the north channel and low-level quay defences.

“The Scheme will facilitate public realm improvements including walkways and cycle ways on a scale not previously seen in Cork city centre, making it more attractive to live in and visit,” said the two bodies in their joint statement.