Taoiseach calls for compromise as total out of work in sector during dispute hits 6,000 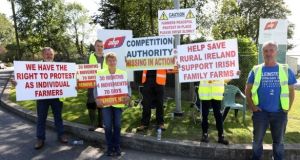 Protests by farmers continue outside meat processing plants around the country. File image

ABP food group has said that 355 of its workers have been temporarily let go from its plant at Cahir, Co Tipperary bringing the total lay-offs in the sector to 6,000.

ABP has also warned a further 182 jobs could be threatened before the end of the week.

Taoiseach Leo Varadkar told the Dáil there was the possibility that 8,000 jobs could be affected in the long-term by the dispute.

He said the protests and blockades had achieved all they could.

The Dáil has scheduled a three-hour debate on Tuesday evening on the beef dispute.

In its statement earlier on Tuesday, ABP said its lay-offs were a result of ongoing blockades at the site.

“The protestors have stopped any product going in to or leaving the site. Production has ceased. Furthermore, these illegal blockades are impacting seriously on the thousands of beef farmers who supply cattle to the site.

“ABP will stay in contact with impacted staff members and provide them with regular updates. It is regrettable that the company has had to take this course of action.

“ABP has expressed its dismay that after an agreement was reached illegal blockades remain in place at Cahir and at other processing sites across the country.”

The plant is a flagship facility for ABP, one of the largest privately owned food processors in Europe. The Cahir facility employs 650 people and slaughters cattle and produces and packs products for retailers.

Minister for Agriculture Michael Creed has said “real self harm” was being inflicted on the Irish beef industry by the ongoing dispute between farmers and processors.

Ireland’s reputation was important in the global beef industry, but the industry was now at tipping point, he said. “We are now witnessing self harm,” he told RTÉ’s Morning Ireland on Tuesday.

Mr Creed added that there was a need for the sector to re-engage and reassure customers. He acknowledged that the price for beef was depressed, but Ireland was at the European average, he said.

“We depend on our reputation. For every day that this goes on it will have a long term impact.”

Farmers’ voices have been heard, he said. “This is as much as can be done. We’re at tipping point. I do acknowledge that it is a difficult time for farmers. The global beef market is extremely competitive.

“I appeal to farmers, to the silent majority. We are at a critical point. We are now witnessing real self harm to our beef industry.”

Pat McCormack, President of the Irish Creamery Milk Suppliers Association (ICMSA) said the organisation had worked with beef farmers involved in protests to try to secure a better deal for them as his organisation has a “major stake in the game”.

The situation had built up following a decade of low and eroding margins, he said, adding that no business could sustain that.

During leaders’ questions in the Dáil, Mr Varadkar said “there is no legal way to fix the price. That is not possible” and farmers were receiving the same average price as across the EU.

Ms McDonald said that many beef farmers make less than €10,000 a year and were struggling for their very survival. “Many see this as their last stand.”

She claimed the dispute “is the direct result of corporate greed.

“Prices are decided by a very small and very powerful group of people, something that doesn’t feel right, that doesn’t look right or doesn’t smell right.”

She called on Mr Creed to organise another round of talks and the solution was for “highly profitable factories to increase the base price to farmers”.

Mr Martin said that the “Government and industry have reacted far too late to a growing crisis”.

He added that the issue had been exacerbated by Brexit and farmers were further enraged by the signing by the Government of the Mercosur beef deal that will allow four South American countries to export up to 100,000 tonnes of beef to the EU annually.

The Taoiseach pointed out that Mercosur was only at the level of political agreement. The Government had not signed the deal. It had been signed by all EU Commissioners and might in two years’ be put to all EU Governments for ratification.