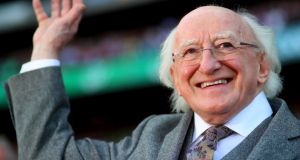 President Michael D Higgins has called for new regulations or enforcement measures to prevent workers from being exploited by a “race to the bottom” in new forms of working.

In an address at an event to mark the centenary of the International Labour Organisation(ILO) at Dublin Castle, he said the world was witnessing precarious employment, contract working and a casualisation of labour.

“The new emerging trends in work practices - so-called innovations - are only innovations in a particular sense, to my mind, insofar as they maximise profits for employers and reduce employees’ hard-won labour rights.”

The President highlighted the experience of online workers in the digital world who, he said, often were not covered by employment law or collective agreements.

“Moreover, such workers seldom have access to social security, paid leave or paid training owing to the fact that the platforms require workers to register as self-employed. Such practices, we know, are also in place in other sectors, including the aviation industry.

“These recent developments in the world of work are nothing less than a recrudescence of some of the worst practices of the 19th century, and the ILO surely has an important role to play in discouraging and potentially outlawing such practices,” Mr Higgins said.

“The co-ordination and direction of employees by an algorithm owned and operated by a company should never be allowed to divest the employer of their responsibilities towards their employees any less than a spurious self-employment does.”

The President said one of the great victories of the labour movement in the past was the regulation of piecework.

He said “ these old practices must not be allowed re-emerge under the cloak of supposed innovation”.

Mr Higgins said the ongoing displacement of secure, certain, regular employment “by uncertain, precarious jobs and characteristic chronic insecurity” was a major cause for concern.

“Many workers are expected to demonstrate what is often referred to as ‘flexibility’, by which is meant a willingness and ability to readily respond to changing circumstances and expectations often without adequate information or recompense.

“Such flexibility is frequently not matched with any security of tenure or appropriate income by employers, with the vista of zero-hour contracts now an appalling reality for many.”

The President told the conference that workers affected by the closure of unsustainable carbon-intensive electricity generation plants must be offered reskilling or upskilling opportunities to enable them to find jobs in other areas such as the green economy.

Mr Higgins also criticised what he described as “the profoundly myopic and regressive decision” by the Trump administration to exit the Paris Agreement on Climate Change.

He said this move – which could take effect from December 2020 – would “effectively subject future generations to a bleak and volatile planet”.

The President argues the neoliberal economic mantra – “in order to restore growth, all that is needed is to reduce deficits by cutting public spending” – had been effectively refuted in more recent academic literature.

He said Government investment in areas like education, health, research and technology was a key component of economic growth and must not be cut in times of economic adversity.

The conference was organised by the Department of Business, Enterprise and Innovation and the National University of Ireland.