Severely ill passenger met by ambulance and taken to hospital 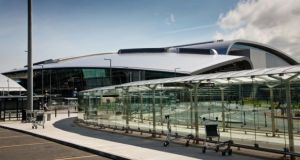 A full emergency was declared and fire engines were on standby at Dublin Airport as a precaution.

An aircraft repatriating American citizens from eastern Europe was forced to make an emergency landing at Dublin Airport on Thursday morning after one of the passengers fell ill over the Atlantic.

Flight OAE6210, a Boeing 767, was travelling to Washington DC after picking up over 200 people in Kiev in Ukraine and Sofia in Bulgaria.

The charter flight was several hundred miles out over the Atlantic on its way to Washington DC when a passenger became severely ill and a medical emergency was declared. It turned back and landed at Dublin Airport at 12.31am.

The incident was confirmed by Dublin airport and the flights’ operator Omni Air International.

Before landing the pilot told Air Traffic Control in Dublin it needed to make an emergency landing and that the plane was carrying 233 people, a consignment of “dangerous goods” and 78,000 pounds of fuel.

A full emergency was declared and fire engines were on standby as a precaution.

The plane landed safely and was met by a HSE ambulance who took the ill passenger to hospital. The plane took off again for Washington three hours later. It is understood no other passengers disembarked the plane.

An Omni Air spokesman said it could not disclose details of the illness but said it was not related to Covid-19.

Omni Air, regularly provides transport services to the US military, including flights which land at Shannon Airport. However Thursday’s flight was not carrying military personnel, it said.

1 Restaurants and gastropubs to reopen in December under Government plan
2 Helen McEntee holds up well for someone with barely a leg to stand on
3 In Brexit end game, Johnson scours menu of unpalatable choices
4 Ireland ‘will do well’ out of €5 billion Brexit fund, says Coveney
5 400 – yes, 400! – Irish retailers for all your online Christmas shopping
Real news has value SUBSCRIBE