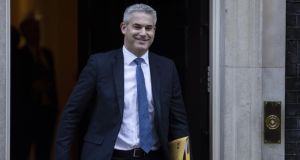 British Brexit secretary Stephen Barclay has said the British government would accept an amendment from a Tory MP aimed at limiting the duration of the backstop Photograph: Dan Kitwood/Getty Images

Northern Ireland politicians have reacted sceptically or guardedly to a proposed amendment that would purport to place a time limit on the backstop designed to avoid a hard Border.

On Wednesday, the British Brexit secretary, Stephen Barclay said the British government would accept an amendment from Tory MP Sir Hugo Swire aimed at limiting the duration of the backstop.

The amendment in some quarters has been interpreted as placing a one-year time limit on the backstop.

It proposes that the backstop would “only be a temporary arrangement and that, in the event that it comes into force, both parties intend to agree a future relationship or alternative arrangements consistent with the political declaration one year after the end of the implementation period”.

The dominant Northern political view of both supporters and opponents of the backstop was that the amendment could not override a legally binding withdrawal agreement between the European Union and the United Kingdom.

The Sinn Féin MP for South Down Chris Hazzard said that a “time-limited backstop is not a backstop”.

“The amendment is an absolute no-no,” he added.

“The withdrawal agreement and the backstop cannot, and will not, be rewritten, renegotiated or vetoed,” added Mr Hazzard.

The Ulster Unionist Party Brexit spokesman Steve Aiken described the amendment as “window dressing” which would have “no legal validity” in relation to an international treaty between the UK and the EU.

He said the amendment would be a mere “wish list for the prime minister that potentially she can take back to Europe”.

“But it does not actually change the backstop and our concern is with the backstop. If you had the withdrawal agreement without the backstop we would be happy,” said Mr Aiken.

The SDLP Brexit spokeswoman Claire Hanna was equally unimpressed with the amendment, saying that it “would have no legal status” and could not supersede any EU-UK deal.

The DUP Lagan Valley MP Sir Jeffrey Donaldson told the News Letter that the party would carefully examine the amendment and would discuss with the British government “whether such a commitment is legally binding”.