In a hurry? Here’s your Tuesday morning briefing 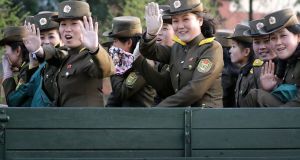 North Korean soldiers wave from the back of a truck at oncoming traffic on Thursday, April 20, 2017, in Pyongyang, North Korea. Photograph: AP Photo/Wong Maye-E

1. “What’s been going on while I’ve been gone?” Barack Obama smiled, as he took to the stage. In the three months since former US president left the White House, his bereft supporters have been keen to catch a glimpse of the man who seems more than ever a symbol of American liberalism and toleration. On Monday, Obama returned to the public eye but there was abig fat elephant in the room.

2. The controversy of the running of the new National Maternity Hospital took a new twist with news that the former master of the hospital, Dr Peter Boylan, has been asked to resign from its board for speaking out against its planned move to the St Vincent’s University Hospital campus.

3. The entire US Senate will go to the White House on Wednesday to be briefed by senior administration officials about the brewing confrontation with North Korea. The unusual briefing underlines the urgency with which the Mr Trump administration is treating the threat posed by Pyongyang’s continuing development of nuclear weapons and missile technology.

4. The Trump administration is considering barring passengers flying to the US from UK airports from carrying laptops, sources have told the Guardian. The proposed ban would be similar to one already imposed on travellers from several Middle Eastern countries.

5. Ireland had long been on Tesla’s seemingly-endless to-do list, and we’ve heard so much from so many about how perfect Ireland is for electric cars (largely flat, largely mild, largely small). The final, eventual arrival of Model S and Model X cars here this week.

A piece by Roger Cole from September 2016 is back in our most-read list on Tuesday morning. He wrote for us at time why he thought at the time Jeremy Corbyn would become British prime minister. “I put a bet on that the Brexit side would triumph in the recent referendum. My only regret now is that I did not put more money on it. Come the British election I will not make that mistake again: my money is on Corbyn,” he wrote.